Let me take you on a journey. We’ll pass by Drupal content renderer services, AJAX commands, javascript libraries and a popular front-end framework. If you’ve only heard of one or two of those things, come lean on the experience I took diving deep into Drupal. I’m pleased with where my adventure took me to, and maybe what I learned will be useful to you too.

Here’s the end result: a contact form, launched from a button link in the site header, with the page beneath obscured by an overlay. The form allows site visitors to get in touch from any page, without leaving what they were looking at. 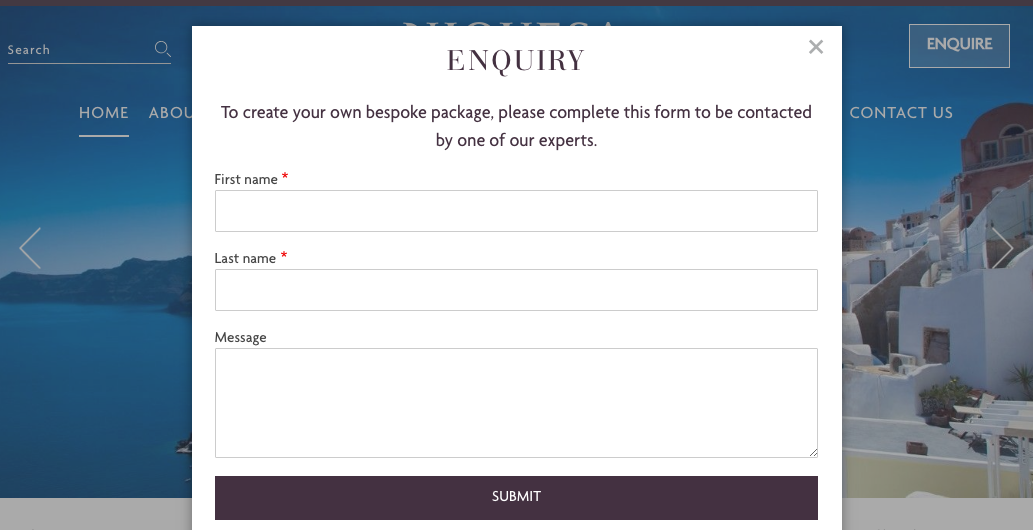 Drupal has its own API for making links launch dialogs (leveraging jQuery UI Dialogs). But our front-end of the site was built with Foundation, the super-popular theming framework, which provides components of its own that are much better for styling. We often base our bespoke themes on Foundation, and manipulate Drupal to fit.

We had already done some styling of Foundation’s Reveal component. In those places, the markup to show in the popup is already in the page, but I didn’t really want the form to be in the page until it was needed. Instead, AJAX could fetch it in. So I wondered if I could combine Drupal’s AJAX APIs with Foundation’s Reveal markup and styling. Come with me down the rabbit hole…

There are quite a few components in making this possible. Here’s a diagram: 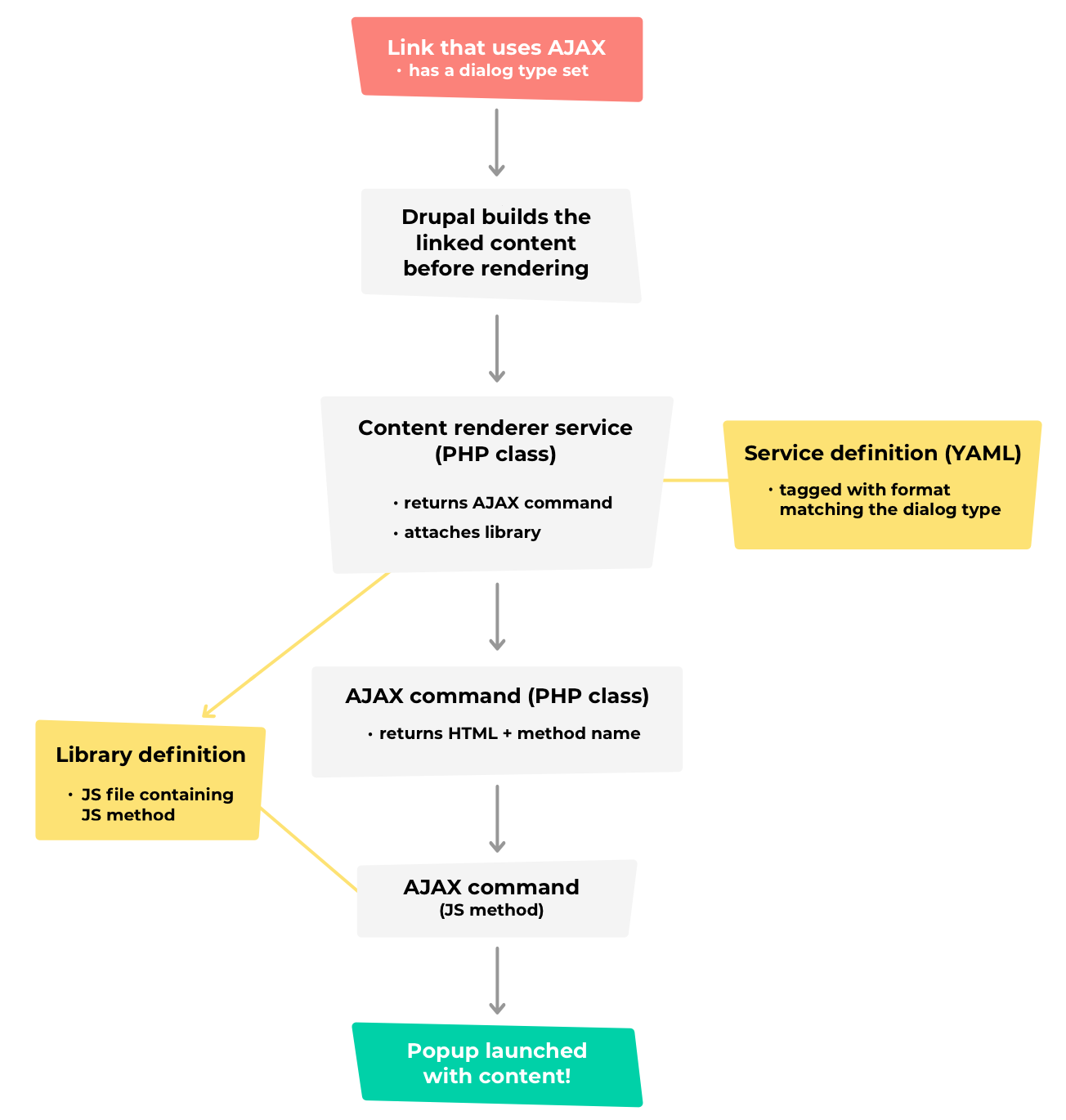 So it comes down to the following parts, which we’ll explore together. Wherever custom code is needed, I’ve posted it in full later in this article.

Let’s start at the beginning: the link. Drupal’s AJAX API for links is pretty neat. We trigger it with two things:

I wanted to have a go at creating my own ‘dialog type’, which would be a Foundation Reveal popup. The HTML fetched by the AJAX call would be shown in it. Let’s start with the basic markup I wanted to my link to have:

This could either just be part of content, or I could get this into a template using a preprocess function that would build the link. Something like this:

After much reading around and breakpoint debugging to figure it out, I discovered that dialog types are matched up to content rendering services. So I needed to define a new one of those, which I could base closely on Drupal’s own DialogRenderer. Here’s the definition from my module’s mymodule.services.yml file:

Adding the tag named ‘render.main_content_renderer’ means my class will be picked up by core’s MainContentRenderersPass when building the container. Drupal’s MainContentViewSubscriber will then consider it as a service that can render responses.

The ‘format’ part of the tag needs to be the value that our data-dialog-type attribute has, with (somewhat arbitrarily?) ‘drupal_‘ prepended. The arguments will just be whatever the constructor for the class needs. I often write my class first and then go back to adjust the service definition once I know what it needs. But I’ll be a good tour guide and show you things in order, rather than shuttling you backwards and forwards!

Onto that FoundationReveal service class now. I started out with a copy of core’s own ModalRenderer which is a simple extension to the DialogRenderer class. Ultimately, that renderer is geared around returning an AJAX command (see the AJAX API documentation), which comes down to specifying a command to invoke in the client-side javascript with some parameters.

I would need my own command, and my FoundationReveal renderer would need to specify it to be used. That only two functional differences were needed in comparison to core’s DialogRenderer:

So the renderer file, mymodule/src/Render/MainContent/FoundationReveal.php (in that location in order to match the namespace in the service file definition), looks like this – look out for those two tweaks:

Now, I’ve mentioned that the command needs to match a javascript function. That means adding some new javascript to the page, which, in Drupal 8, we do by defining a library. My ‘mymodule/dialog.ajax‘ library was attached in the middle of FoundationReveal above. My library file defines what actual javascript file to include – it is mymodule.libraries.yml and looks like this:

Then here’s that actual mymodule/js/dialog.ajax.js file. It adds the ‘openFoundationReveal‘ method to the prototype of the globally-accessible Drupal.AjaxCommands. That matches the command name returned by my OpenFoundationRevealCommand::render() method that we saw.

There we have it – that last bit of the command opens the Foundation Reveal popup dialog!

I should also add that since I was showing a contact form in the popup, I installed the Contact ajax module. This meant that a site visitor would stay within the popup once they submit the form, which meant for a clean user experience.

Thanks for following along with me!