Today we complete the user migration example. In the previous post, we covered how to migrate email, timezone, username, password, and status. This time, we cover creation date, roles, and profile pictures. The source, destination, and dependencies configurations were explained already. Therefore, we are jumping straight to the process transformations in this entry. 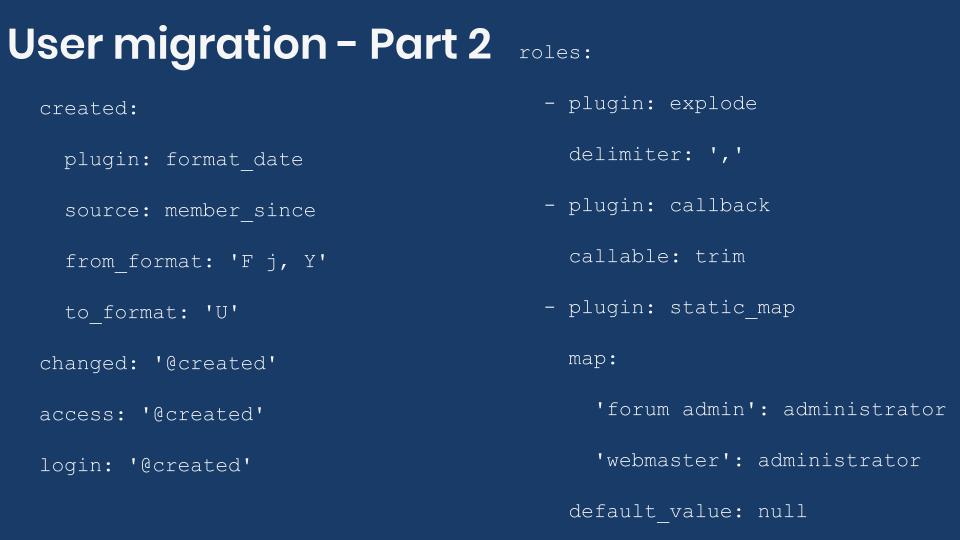 You can get the full code example at https://github.com/dinarcon/ud_migrations The module to enable is UD users whose machine name is ud_migrations_users. The two migrations to execute are udm_user_pictures and udm_users. Notice that both migrations belong to the same module. Refer to this article to learn where the module should be placed.

The example assumes Drupal was installed using the standard installation profile. Particularly, we depend on a Picture (user_picture) image field attached to the user entity. The word in parenthesis represents the machine name of the image field.

The explanation below is only for the user migration. It depends on a file migration to get the profile pictures. One motivation to have two migrations is for the images to be deleted if the file migration is rolled back. Note that other techniques exist for migrating images without having to create a separate migration. We have covered two of them in the articles about subfields and constants and pseudofields.

Have a look at the previous post for details on the source values. For reference, the user creation time is provided by the member_since column, and one of the values is April 4, 2014. The following snippet shows how the various user date related properties are set:

The created, entity property stores a UNIX timestamp of when the user was added to Drupal. The value itself is an integer number representing the number of seconds since the epoch. For example, 280299600 represents Sun, 19 Nov 1978 05:00:00 GMT. Kudos to the readers who knew this is Drupal’s default expire HTTP header. Bonus points if you knew it was chosen in honor of someone’s birthdate. 😉

Back to the migration, you need to transform the provided date from Month day, year format to a UNIX timestamp. To do this, you use the format_date plugin. The from_format is set to F j, Y which means your source date consists of:

If the value of from_format does not make sense, you are not alone. It is actually assembled from format characters of the date PHP function. When you need to specify the from and to formats, you basically need to look at the documentation and assemble a string that matches the desired date format. You need to pay close attention because upper and lowercase letters represent different things like Y and y for the year with four-digits versus two-digits respectively. Some date components have subtle variations like d and j for the day with or without leading zeros respectively. Also, take into account white spaces and date component separators. To finish the plugin configuration, you need to set the to_format configuration to something that produces a UNIX timestamp. If you look again at the documentation, you will see that U does the job.

The changed, access, and login entity properties are also dates in UNIX timestamp format. changed indicates when the user account was last updated. access indicates when the user last accessed the site. login indicated when the user last logged in. For brevity, the same value assigned to created is also assigned to these three entity properties. The at sign (@) means copy the value of a previous mapping in the process pipeline. If needed, each property can be set to a different value or left unassigned. None is actually required.

For reference, the roles are provided by the user_roles column, and one of the values is forum moderator, forum admin. It is a comma separated list of roles from the legacy system which need to be mapped to Drupal roles. It is possible that the user_roles column is not provided at all in the source. The following snippet shows how the roles are set:

First, the skip_on_empty plugin is used to skip the processing of the roles if the source column is missing. Then, the explode plugin is used to break the list into an array of strings representing the roles. Next, the callback plugin invokes the trim PHP function to remove any leading or trailing whitespace from the role names. Finally, the static_map plugin is used to manually map values from the legacy system to Drupal roles. All of these plugins have been explained previously. Refer to other articles in the series or the plugin documentation for details on how to use and configure them.

There are some things that are worth mentioning about migrating roles using this particular process pipeline. If the comma separated list includes spaces before or after the role name, you need to trim the value because the static map will perform an equality check. Having extraneous space characters will produce a mismatch.

Also, you do not need to map the anonymous or authenticated roles. Drupal users are assumed to be authenticated and cannot be anonymous. Any other role needs to be mapped manually to its machine name. You can find the machine name of any role in its edit page. In the example, only two out of four roles are mapped. Any role that is not found in the static map will be assigned the value null as indicated in the default_value configuration. After processing the null value will be ignored, and no role will be assigned. But you could use this feature to assign a default role in case the static map does not produce a match.

For reference, the profile picture is provided by the user_photo column, and one of the values is P01. This value corresponds to the unique identifier of one record in the udm_user_pictures file migration, which is part of the same demo module.  It is important to note that the user_picture field is not a user entity property. The field is created by the standard installation profile and attached to the user entity. You can find its configuration in the “Manage fields” tab of the “Account settings” configuration page at /admin/config/people/accounts. The following snippet shows how profile pictures are set:

Image fields are entity references. Their target_id property needs to be an integer number containing the file id (fid) of the image. This can be obtained using the migration_lookup plugin. Details on how to configure it can be found in this article. You could simply use user_picture as your field mapping because target_id is the default subfield and could be omitted. Also note that the alt subfield is not mapped. If present, its value will be used for the alternative text of the image. But if it is not specified, like in this example, Drupal will automatically generate an alternative text out of the username. An example value would be: Profile picture for user michele.

Technical note: The user entity contains other properties you can write to. For a list of available options, check the baseFieldDefinitions() method of the User class defining the entity. Note that more properties can be available up in the class hierarchy.

And with that, we wrap up the user migration example. We covered how to migrate a user’s mail, timezone, username, password, status, creation date, roles, and profile picture. Along the way, we presented various process plugins that had not been used previously in the series. We showed a couple of examples of process plugin chaining to make sure the migrated data is valid and in the format expected by Drupal.

This blog post series is made possible thanks to these generous sponsors. Contact us if your organization would like to support this documentation project, whether the migration series or other topics.