The past years, I’ve examined Drupal.org’s contribution data to understand who develops Drupal, how diverse the Drupal community is, how much of Drupal’s maintenance and innovation is sponsored, and where that sponsorship comes from.

This year’s report shows that:

What are Drupal.org issues?

“Issues” are pages on Drupal.org. Each issue tracks an idea, feature request, bug report, task, or more. See https://www.drupal.org/project/issues for the list of all issues.

For this report, we looked at all Drupal.org issues marked “closed” or “fixed” in the 12-month period from July 1, 2018 to June 30, 2019. The issues analyzed in this report span Drupal core and thousands of contributed projects, across all major versions of Drupal.

What are Drupal.org credits?

In the spring of 2015, after proposing initial ideas for giving credit, Drupal.org added the ability for people to attribute their work in the Drupal.org issues to an organization or customer, or mark it the result of volunteer efforts.

A screenshot of an issue comment on Drupal.org. You can see that jamadar worked on this patch as a volunteer, but also as part of his day job working for TATA Consultancy Services on behalf of their customer, Pfizer.

Drupal.org’s credit system is truly unique and groundbreaking in Open Source and provides unprecedented insights into the inner workings of a large Open Source project. There are a few limitations with this approach, which we’ll address at the end of this report.

What is the Drupal community working on?

The majority of the credits are the result of work on contributed modules:

Compared to the previous period, contribution credits increased across all project types:

While some of these increases reflect new contributions, others are existing contributions that are newly reported. All contributions are valuable, whether they’re code contributions, or non-product and community-oriented contributions such as organizing events, giving talks, leading sprints, etc. The fact that the credit system is becoming more accurate in recognizing more types of Open Source contribution is both important and positive.

Who is working on Drupal?

Consistent with previous years, approximately 51% of the individual contributors received just one credit. Meanwhile, the top 30 contributors (the top 0.4%) account for 19% of the total credits. In other words, a relatively small number of individuals do the majority of the work. These individuals put an incredible amount of time and effort into developing Drupal and its contributed projects:

Out of the top 30 contributors featured this year, 28 were active contributors in the 2017-2018 period as well. These Drupalists’ dedication and continued contribution to the project has been crucial to Drupal’s development.

It’s also important to recognize that most of the top 30 contributors are sponsored by an organization. Their sponsorship details are provided later in this article. We value the organizations that sponsor these remarkable individuals, because without their support, it could be more challenging for these individuals to be in the top 30.

It’s also nice to see two new contributors make the top 30 this year — Alona O’neill with sponsorship from Hook 42 and Thalles Ferreira with sponsorship from CI&T. Most of their credits were the result of smaller patches (e.g. removing deprecated code, fixing coding style issues, etc) or in some cases non-product credits rather than new feature development or fixing complex bugs. These types of contributions are valuable and often a stepping stone towards towards more in-depth contribution.

How much of the work is sponsored?

Issue credits can be marked as “volunteer” and “sponsored” simultaneously (shown in jamadar’s screenshot near the top of this post). This could be the case when a contributor does the necessary work to satisfy the customer’s need, in addition to using their spare time to add extra functionality.

Who is sponsoring the work? 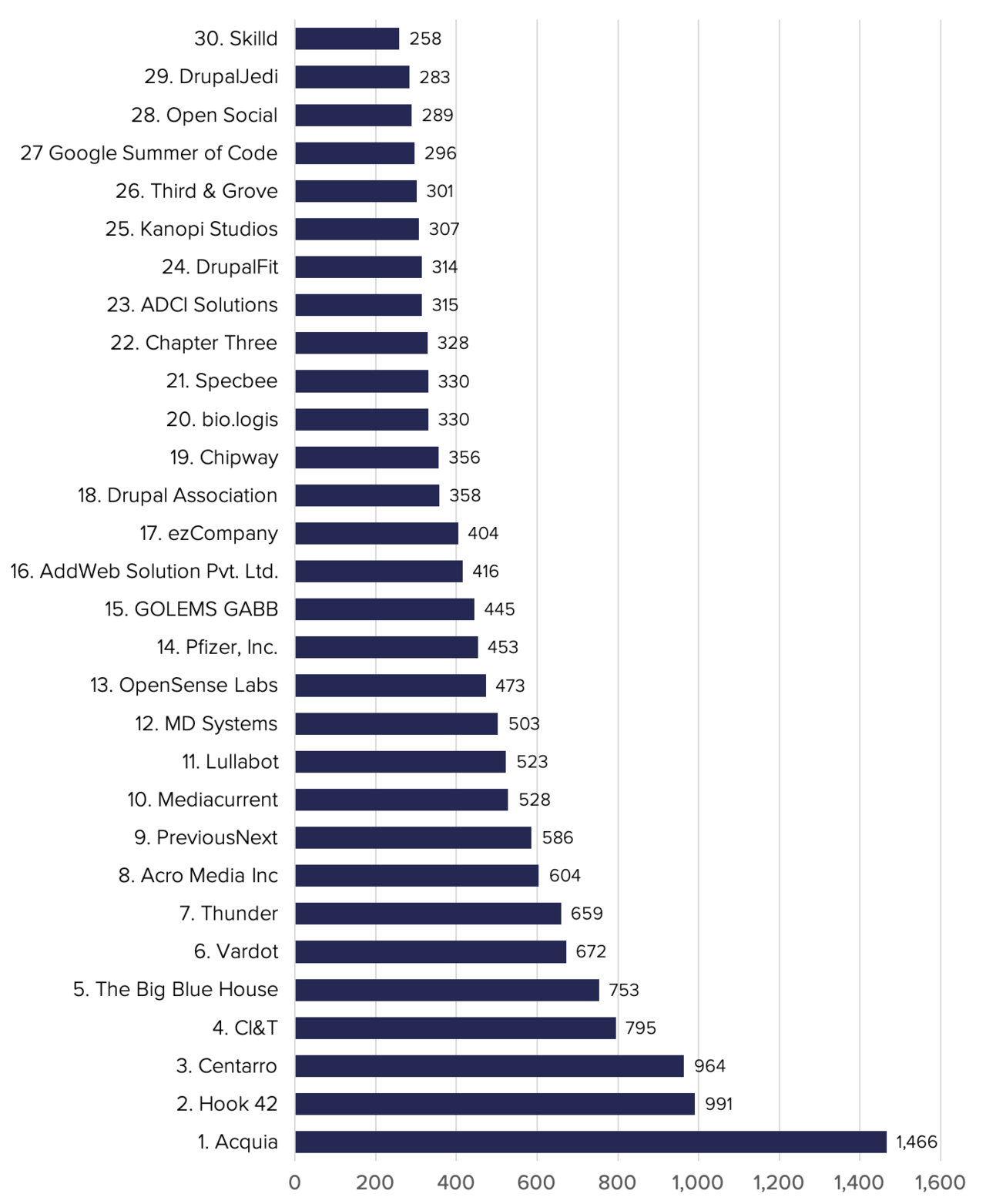 Top contributing organizations based on the number of issue credits.

While not immediately obvious from the graph above, a variety of different types of companies are active in Drupal’s ecosystem:

It would be interesting to see what would happen if more end users mandated contributions from their partners. Pfizer, for example, only works with agencies that contribute back to Drupal, and uses Drupal’s credit system to verify their vendors’ claims. The State of Georgia started doing the same; they also made Open Source contribution a vendor selection criteria. If more end users took this stance, it could have a big impact on the number of digital agencies, hosting companies and system integrators that contribute to Drupal.

While we should encourage more organizations to sponsor Drupal contributions, we should also understand and respect that some organizations can give more than others and that some might not be able to give back at all. Our goal is not to foster an environment that demands what and how others should give back. Instead, we need to help foster an environment worthy of contribution. This is clearly laid out in Drupal’s Values and Principles.

How diverse is Drupal?

Supporting diversity and inclusion within Drupal is essential to the health and success of the project. The people who work on Drupal should reflect the diversity of people who use and work with the web.

I looked at both the gender and geographic diversity of Drupal.org contributors. While these are only two examples of diversity, these are the only diversity characteristics we currently have sufficient data for. Drupal.org recently rolled out support for Big 8/Big 10, so next year we should have more demographics information

The data shows that only 8% of the recorded contributions were made by contributors who do not identify as male, which continues to indicate a wide gender gap. This is a one percent increase compared to last year. The gender imbalance in Drupal is profound and underscores the need to continue fostering diversity and inclusion in our community.

Last year I wrote a post called about the privilege of free time in Open Source. It made the case that Open Source is not a meritocracy, because not everyone has equal amounts of free time to contribute. For example, research shows that women still spend more than double the time as men doing unpaid domestic work, such as housework or childcare. This makes it more difficult for women to contribute to Open Source on an unpaid, volunteer basis. It’s one of the reasons why Open Source projects suffer from a lack of diversity, among others including hostile environments and unconscious biases. Drupal.org’s credit data unfortunately still shows a big gender disparity in contributions:

Ideally, over time, we can collect more data on non-binary gender designations, as well as segment some of the trends behind contributions by gender. We can also do better at collecting data on other systemic issues beyond gender alone. Knowing more about these trends can help us close existing gaps. In the meantime, organizations capable of giving back should consider financially sponsoring individuals from underrepresented groups to contribute to Open Source. Each of us needs to decide if and how we can help give time and opportunities to underrepresented groups and how we can create equity for everyone in Drupal.

When measuring geographic diversity, we saw individual contributors from six continents and 114 countries:

Asia, South America and Africa remain big opportunities for Drupal, as their combined population accounts for 6.3 billion out of 7.5 billion people in the world. Unfortunately, the reported contributions from Asia are declining year over year. For example, compared to last year’s report, there was a 17% drop in contribution from India. Despite that drop, India remains the second largest contributor behind the United States: 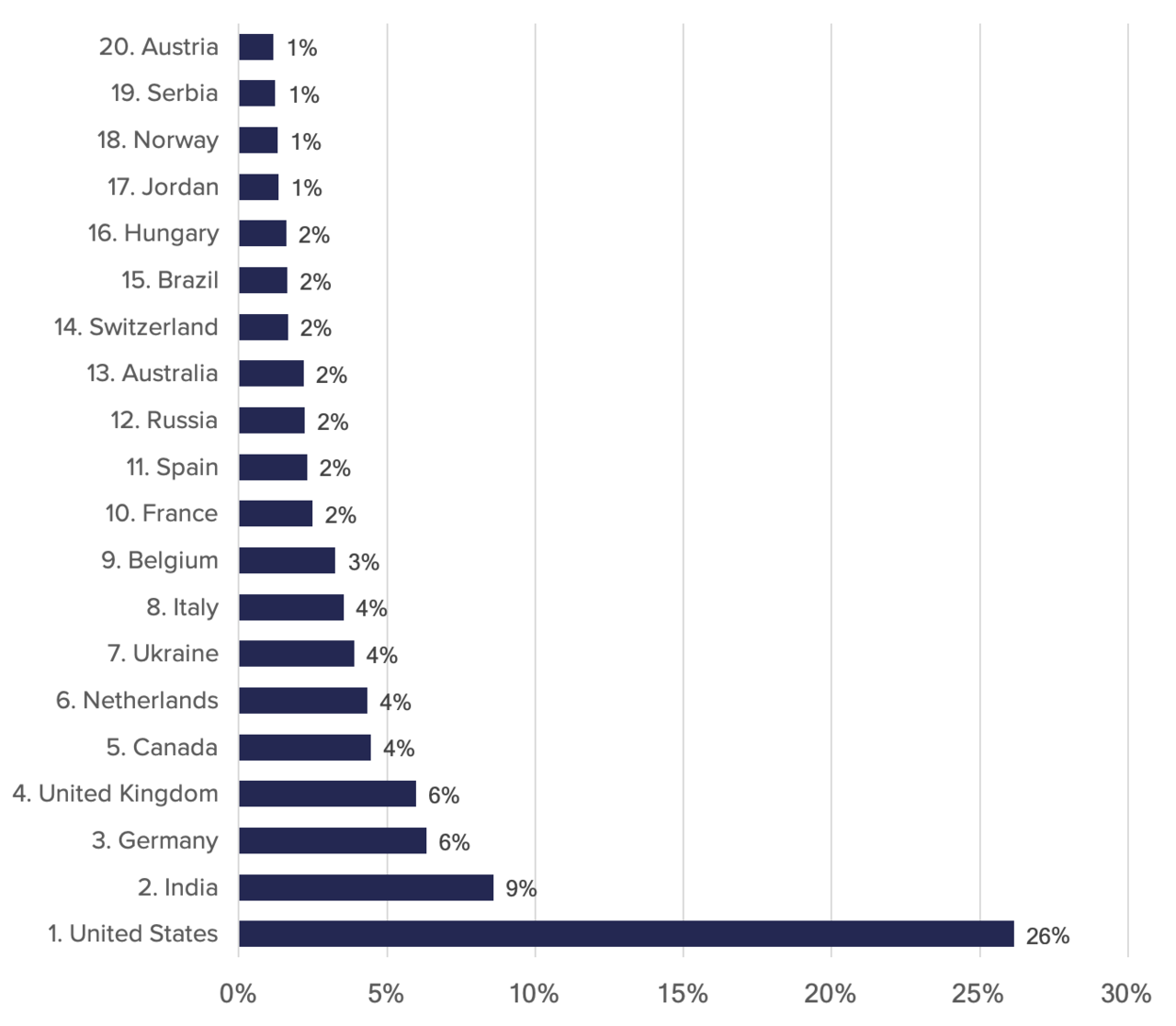 The top 20 countries from which contributions originate. The data is compiled by aggregating the countries of all individual contributors behind each issue. Note that the geographical location of contributors doesn’t always correspond with the origin of their sponsorship. Wim Leers, for example, works from Belgium, but his funding comes from Acquia, which has the majority of its customers in North America.

To create more awareness of which organizations are sponsoring the top individual contributors, I included a more detailed overview of the top 50 contributors and their sponsors. If you are a Drupal developer looking for work, these are some of the companies I’d apply to first. If you are an end user looking for a company to work with, these are some of the companies I’d consider working with first. Not only do they know Drupal well, they also help improve your investment in Drupal.

Limitations of the credit system

It is important to note a few of the current limitations of Drupal.org’s credit system:

All of this means that the actual number of contributions and contributors could be significantly higher than what we report.

Like Drupal itself, the Drupal.org credit system needs to continue to evolve. Ultimately, the credit system will only be useful when the community uses it, understands its shortcomings, and suggests constructive improvements.

A first experiment with weighing credits

As a simple experiment, I decided to weigh each credit based on the adoption of the project the credit is attributed to. For example, each contribution credit to Drupal core is given a weight of 11 because Drupal core has about 1,1 million active installations. Credits to the Webform module, which has over 400,000 installations, get a weight of 4. And credits to Drupal’s Commerce project gets just 1 point as it is installed on fewer than 100,000 sites. 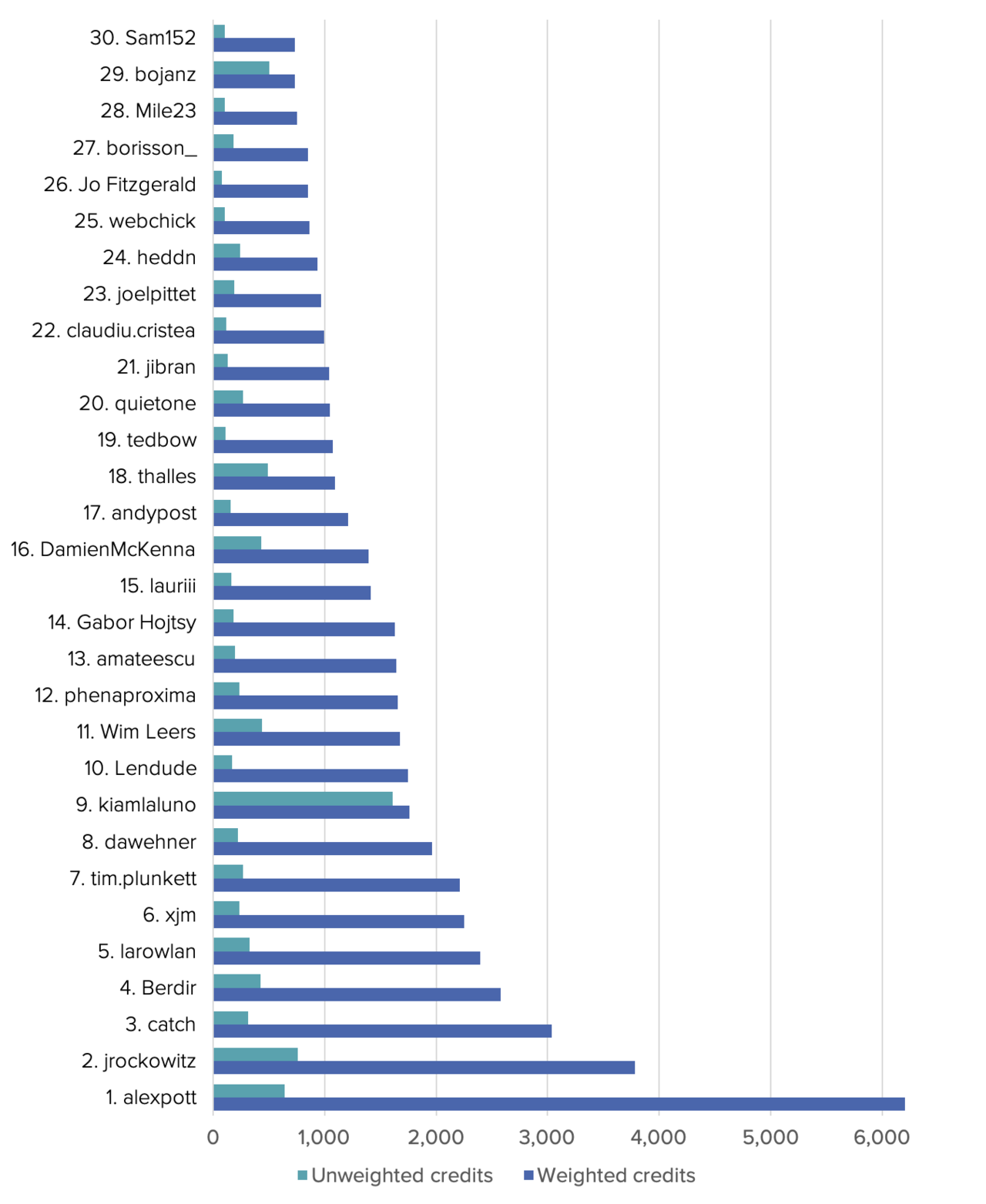 The top 30 contributing individuals based on weighted Drupal.org issue credits. 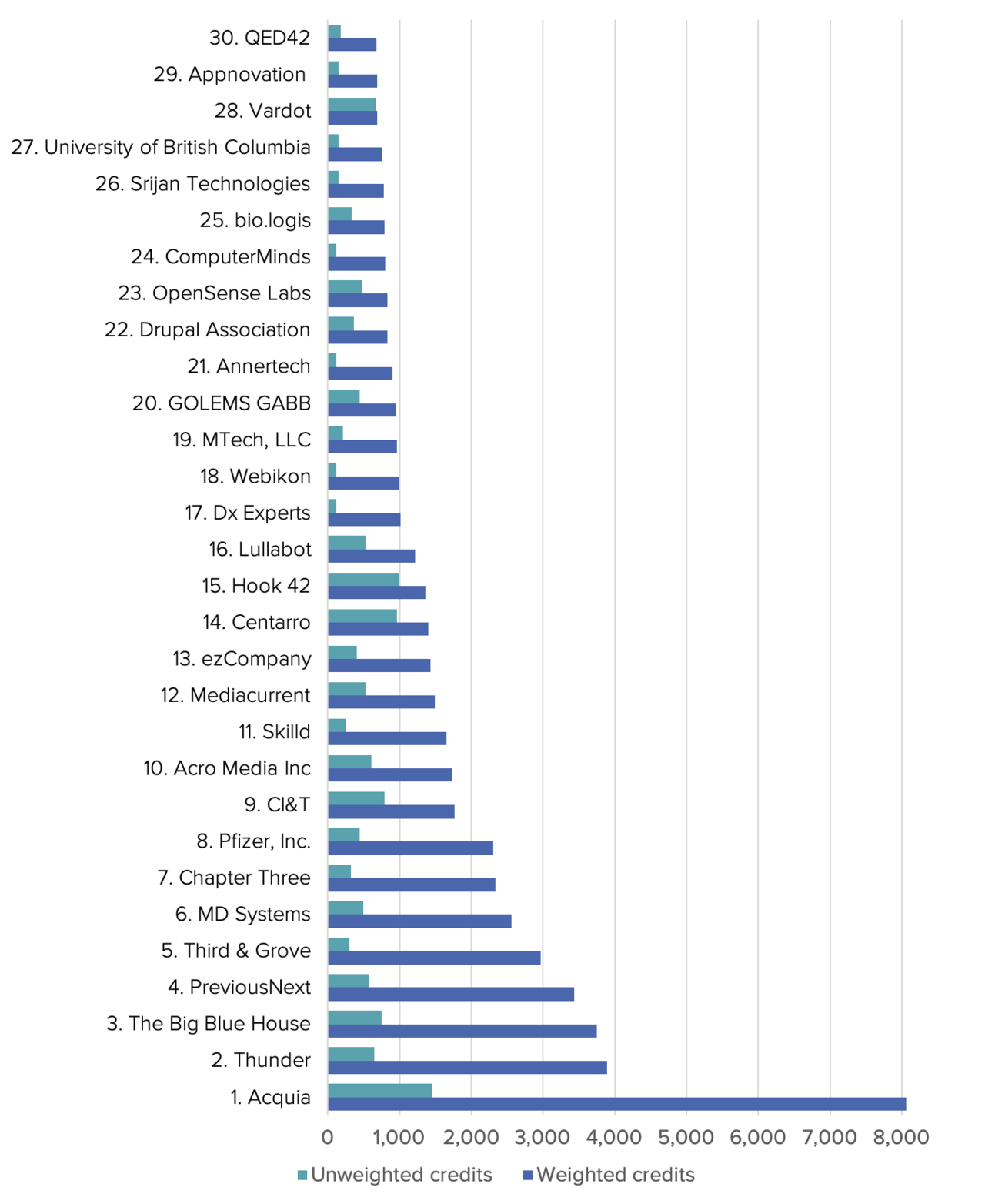 The top 30 contributing organizations based on weighted Drupal.org issue credits.

To grow and sustain Drupal, we should support those that contribute to Drupal and find ways to get those that are not contributing involved in our community. Improving diversity within Drupal is critical, and we should welcome any suggestions that encourage participation from a broader range of individuals and organizations.