Recording my experiences of Drupal Camp Pune before they fade away. If you are connected with me on twitter, you must have seen a spike in my tweets over the weekend of 14th-15th September 2019.

I was privileged to attend this 2-day event and want to admit that my experience of co-presenting a workshop, attending several amazing sessions, meeting old friends and new was great. Had the chance to meet a lot of people from the Drupal community, who were earlier only familiar to me via their usernames. The diversity of the sessions was really impressive. #DCP19 contained sessions for Backend, Frontend Devs, Quality Analysts, Managers, Students, Community, etc. ranging from Beginners to Experts levels.

Being a co-organizer of a Drupal event earlier, I knew how important it was to get the audience on the day of the event. The attendance was more than what was expected for both the days. This was a good sign for the event organizers.

Undoubtedly, the star of the event was none other than Mr. Preston So. It was great to interact with him. I had initially expected his keynote to be around Gatsby. Instead, his topic was a broader one, he highlighted the transition from Content Management systems to Content Management Stack.

He also showed how modern applications are being developed and the role of Drupal & Gatsby in it. His keynote sparked a thought in my head around how applications can be developed and what is the way forward. I would like to share a couple of non-technical highlights of his prenote:

Post the Keynote, Preston was surrounded by people and he was busy answering dozens of questions (I was a part of that group). Questions ranged from technical aspects of Drupal, Gatsby, to him learning so many languages, etc. 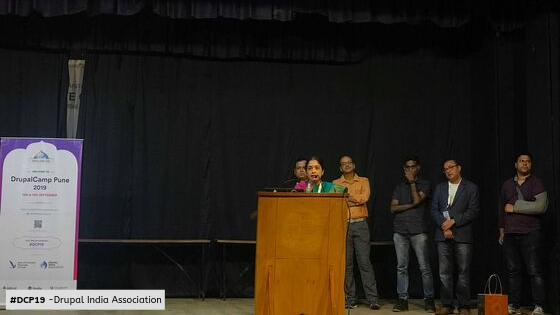 The Drupal India Association board members addressed the audience, where they showcased brand new the DIA logo designed by QED42’s design team! For more updates around DIA follow their twitter handle – @india_drupal

| Drupal in a Day

A massive part of my role at #DCP19 was to co-present a 5 hour  “Drupal in a Day” workshop for the students. I co-presented with Nitesh Sethia & Meena Bisht, training and educating students who hadn’t heard of Drupal, around concepts like Opensource, Drupal, community, etc. Students gained hands-on experience with Drupal through:

We also spoke about the Drupal Campus Ambassador Programme which aims to bridge the gap between students and the Industry. 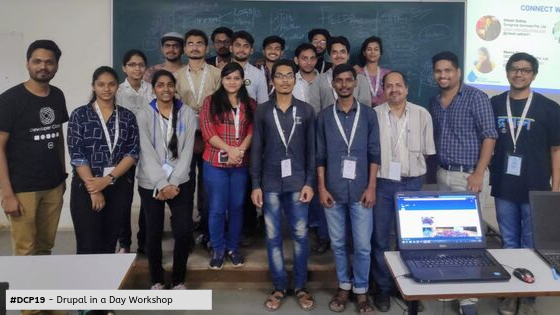 One of my favourite moments from the workshop was the attendee’s reactions when they witnessed the power of Views. They were amazed at how Views can be used to fetch data we want from the database and display it according to our needs. The responses and students eagerness to learn more new topics was a really satisfying experience.

Sponsors are one of the building blocks in making DrupalCamps successful! This year we had 6 sponsors. 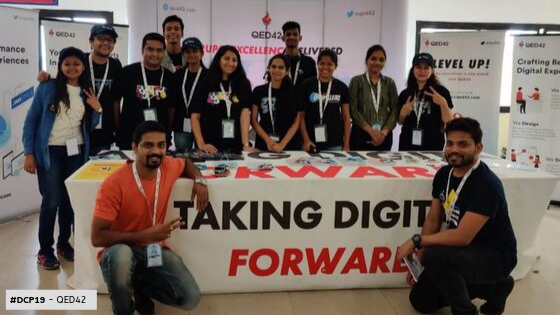 QED42 was the platinum sponsor for DrupalCamp Pune 2019. We were not only the sponsors but were also the organizers for the event. QED42’s booth, vibrant standees, Quizzes around Drupal, JavaScript, Machine Learning, and Hackathon appealed to the students and event attendees. We also carried out an internship drive for students. QED42 is known in the Drupal community for its designs and goodies, this year we had T-shirts, stickers, notepads, and designed quiz cards as giveaways.

Day one was tiring and about to get over, and we received an update regarding the After-party from the @drupalcamppune twitter handle!

The after-party was one of the memorable moments of #DCP19 wherein I had numerous great conversations. I met a lot of people informally and got to know the jolly side of their life. I was so engaged in the conversations that I totally missed the dance floor. We reminisced memories from our past Drupal events, the current event and discussed future events too. Sharing a few snaps from the party at the end of this blog. Since I was caught up with “Drupal in a Day” workshop on the first day, I missed most of the sessions presented on that day. You can find out more about the sessions here – http://camp2019.drupalpune.com/accepted-sessions. However, I was lucky to attend sessions on the second day. Here are some sessions I loved: 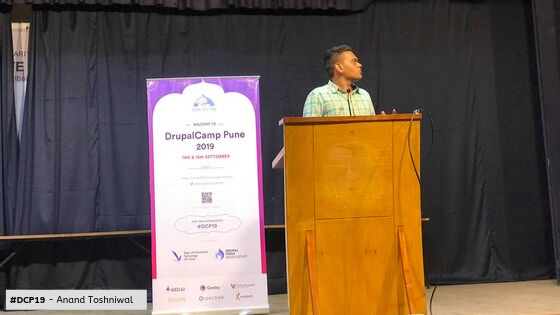 The demo amazed the audience and received loud applause. Anand had set up a Drupal e-commerce store and he showcased how he could place an order with Alexa via a Multi-turn dialog. PS: Reach out to me for the recorded video of the demo! 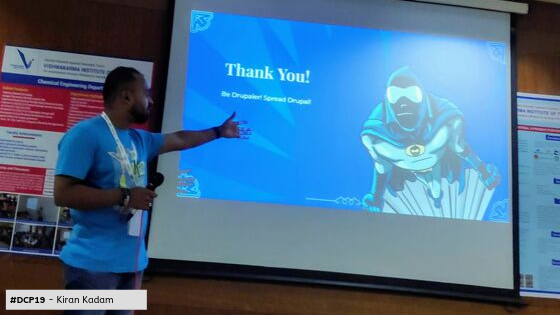 Filled with Frontend enthusiasts, Kiran Kadam spoke passionately about what pixel-perfect web is and how to achieve it. 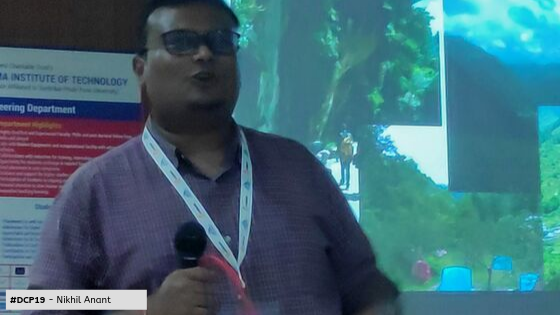 Nikhil shared his experience of visiting Manali and the challenges it brought with it, describing how things can be explained in the form of stories for effective team communication. 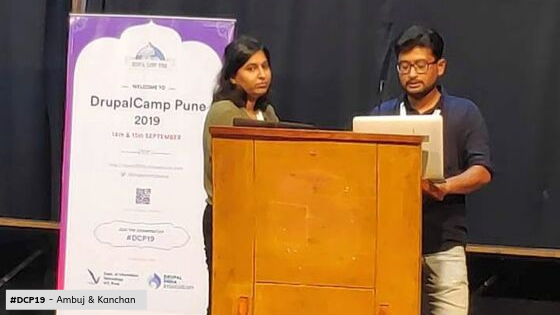 Automation is my favorite part in Quality Assurance process, and these guys took it to the next level. 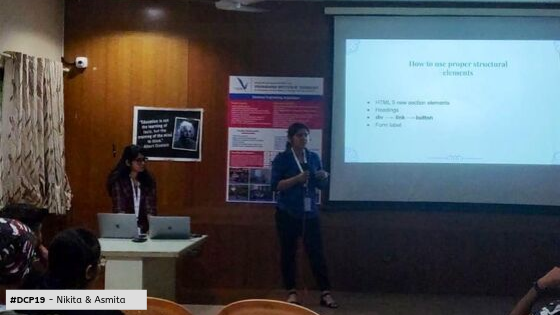 The best thing about the session was the fact that not only QAs but also Developers who were equally interested in implementing A11Y and considered it to be an inseparable part of their web-development practices.

Overall, it was a great event put up by the organizers of #DCP19. The closing session was hosted by Sushyl & Ajit, where we acknowledged the organizing team’s efforts and thanked them for making DrupalCamp Pune a huge success. Right from the swag-kits, keynotes, sessions, speakers, venue, food, after-party, and countless important items, the organizers deserve a huge round of applause. 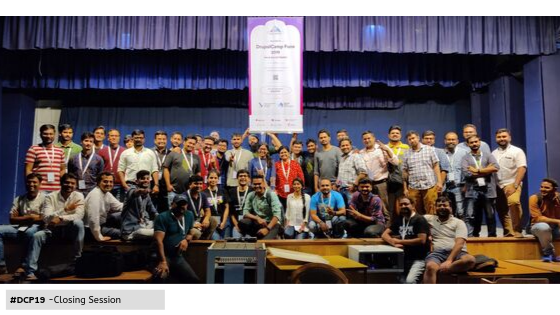 Next year, I am looking forward to being a part of the organizing team and experience the excitement of planning DrupalCamp Pune! 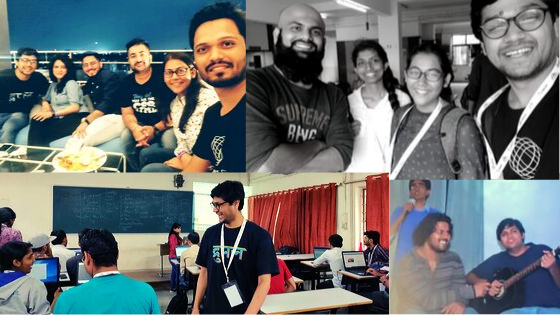 I really appreciate and thank you for taking out time for reading this post. Hope we cross paths at the next Drupal event. #DrupalThanks