Last week, many Drupalists came together for Drupalcon Amsterdam.

As a matter of tradition, I presented my State of Drupal keynote. You can watch a recording of my keynote (starting at 20:44 minutes), or download a copy of my slides (149 MB).

I kicked off my keynote with an update on Drupal 8. Drupal 8.8 is expected to ship on December 4th, and will come with many exciting improvements.

Drupal 8.7 shipped with a Media Library to allow editors to reuse images, videos and other media assets. In Drupal 8.8, Media Library has been marked as stable, and features a way to easily embed media assets using a WYSIWYG text editor.

I’m even more proud to say that Drupal has never looked better, nor been more accessible. I showed our progress on Claro, a new administration UI for Drupal. Once Claro is stable, Drupal will look more modern and appealing out-of-the-box.

The Composer Initiative has also made significant progress. Drupal 8.8 will be the first Drupal release with proper, official support for Composer out-of-the-box. Composer helps solve the problem of Drupal being difficult to install and update. With Composer, developers can update Drupal in one step, as Composer will take care of updating all the dependencies (e.g. third party code).

What is better than one-step updates? Zero-step updates. We also showed progress on the Automated Updates Initiative.

Drupal 9 will be the easiest major update 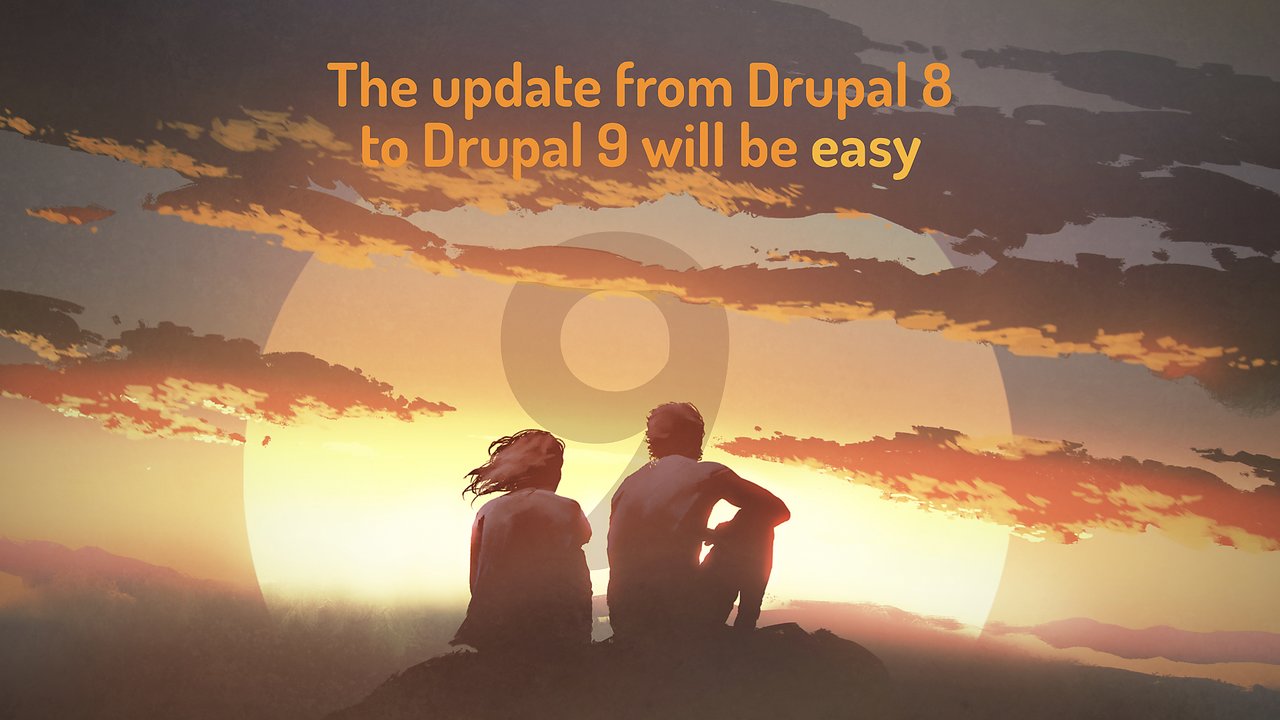 Next, I gave an update on Drupal 9, as we’re just eight months from the target release date. We have been working hard to make Drupal 9 the easiest major update in the last decade. In my keynote at 42:25, I showed how to upgrade your site to Drupal 9.0.0’s development release.

I am proud of all the progress we made on Drupal 8. Nevertheless, it’s also time to start thinking about our strategic priorities for Drupal 9. With that in mind, I proposed four strategic tracks for Drupal 9 (and three initial initiatives): 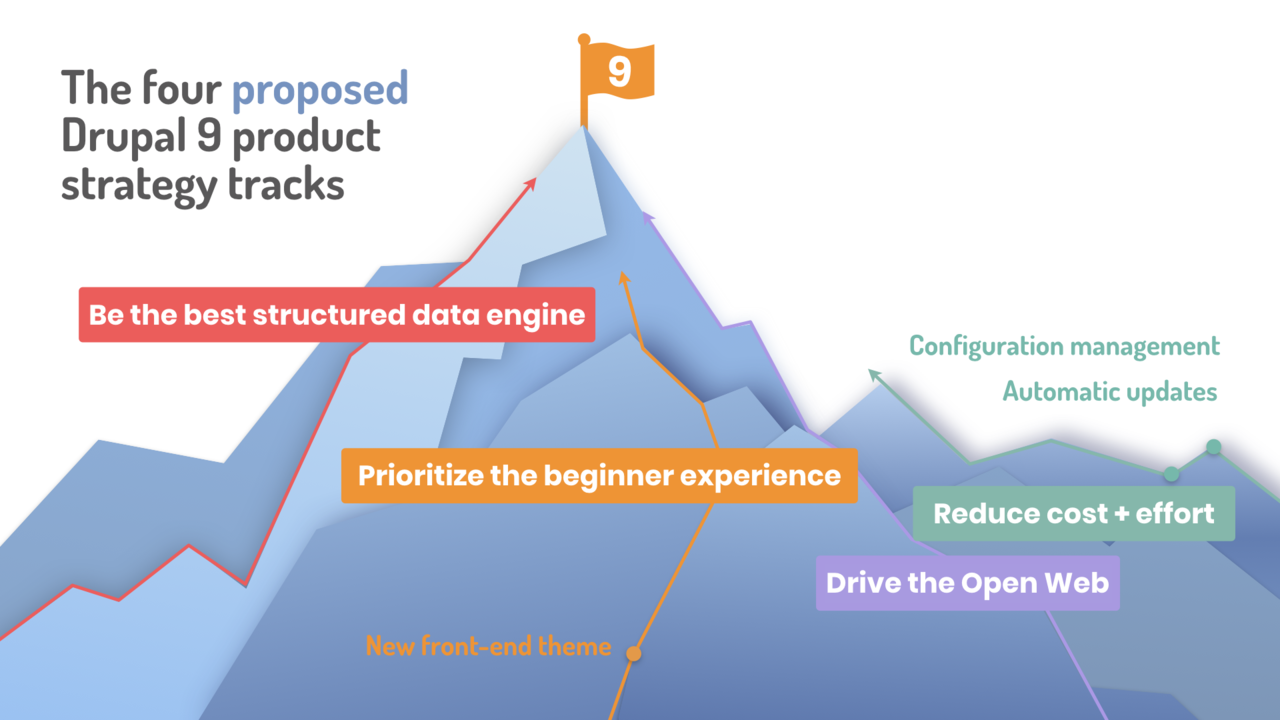 Users want site development to be low-cost and zero-maintenance. As a result, we’ll need to continue to focus on initiatives such as automated updates, configuration management, and more.

As we saw in a survey Acqua’s UX team conducted, most people have a relatively poor initial impression of Drupal, though if they stick with Drupal long enough, their impression of Drupal grows significantly over time. This unlike any of its competitors, whose impression decreases as experience is gained. Drupal 9 should focus on attracting new users, and decreasing beginners’ barriers to entry so they can fall in love with Drupal much sooner. 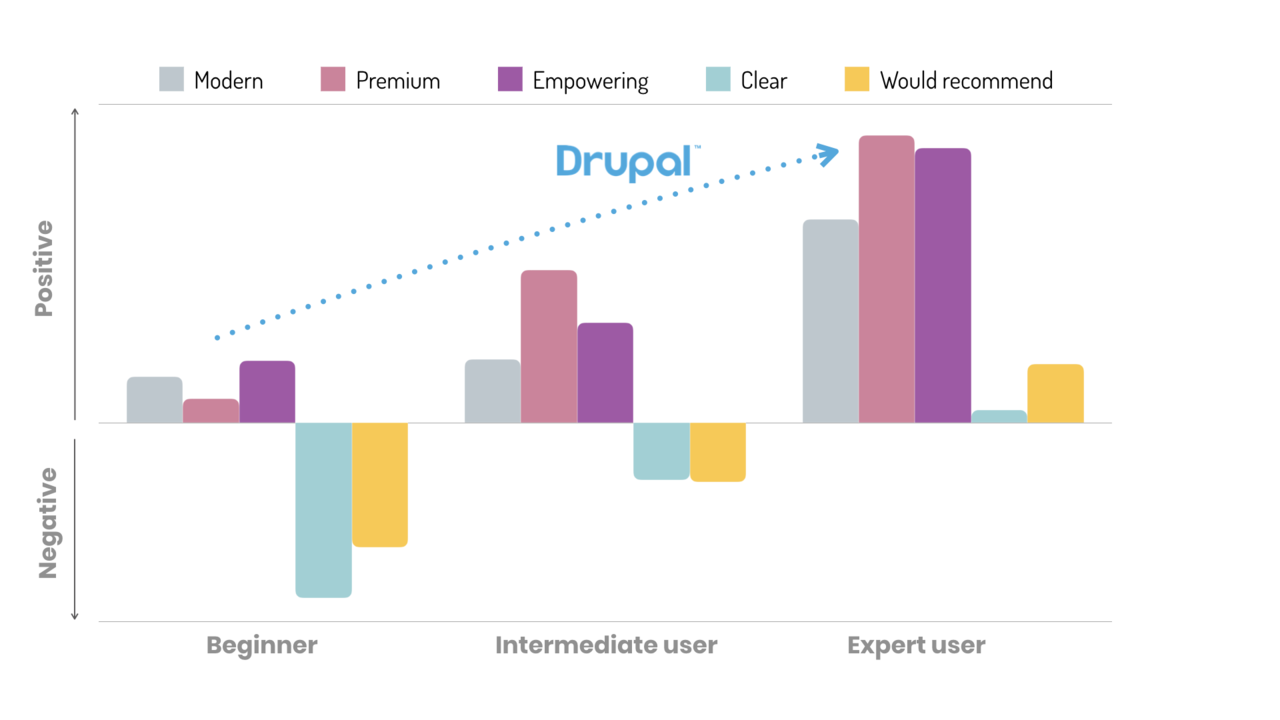 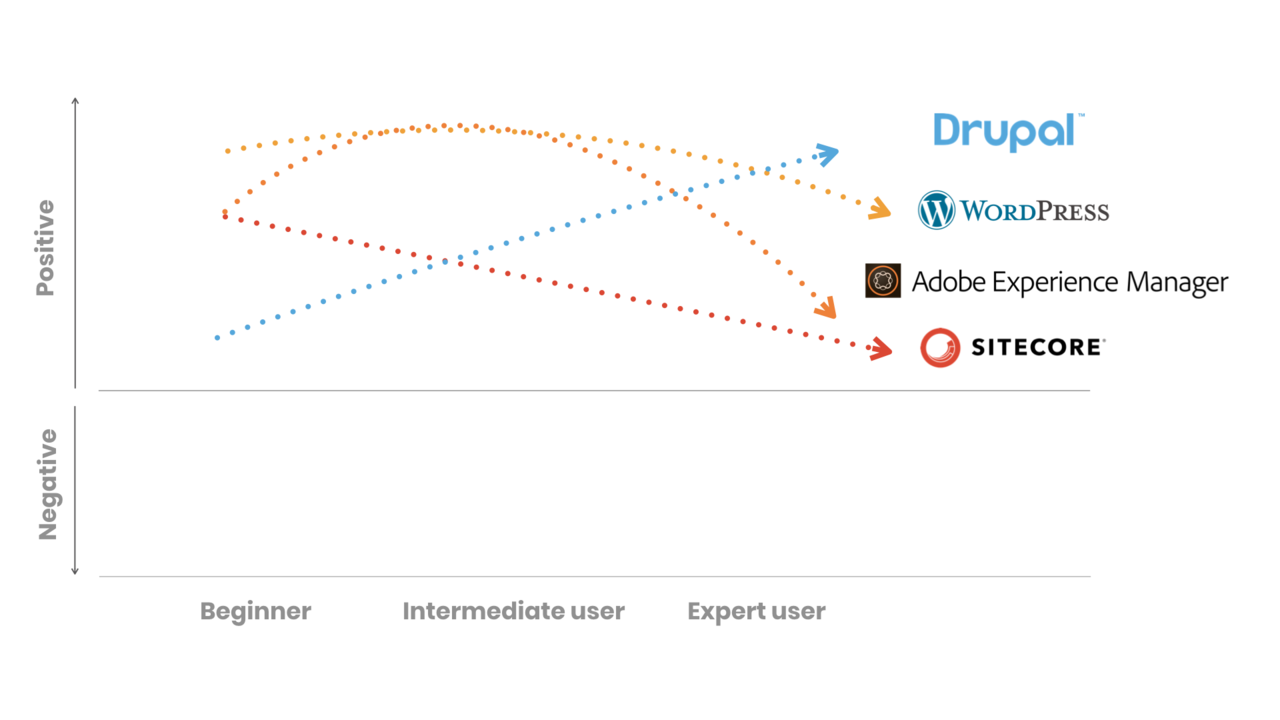 Drupal’s sentiment curve goes in the opposite direction of WordPress’, AEM’s and Sitecore’s. This presents both a big challenge and opportunity for Drupal.

We also officially launched the first initiative on this track; a new front-end theme for Drupal called “Olivero”. This new default theme will give new users a much better first impression of Drupal, as well as reflect the modern backend that Drupal sports under the hood.

As you may know, 1 out of 40 websites run on Drupal. With that comes a responsibility to help drive the future of the Open Web. By 2022-2025, 4 billion new people will join the internet. We want all people to have access to the open web, and as a result should focus on accessibility, inclusiveness, security, privacy, and interoperability. 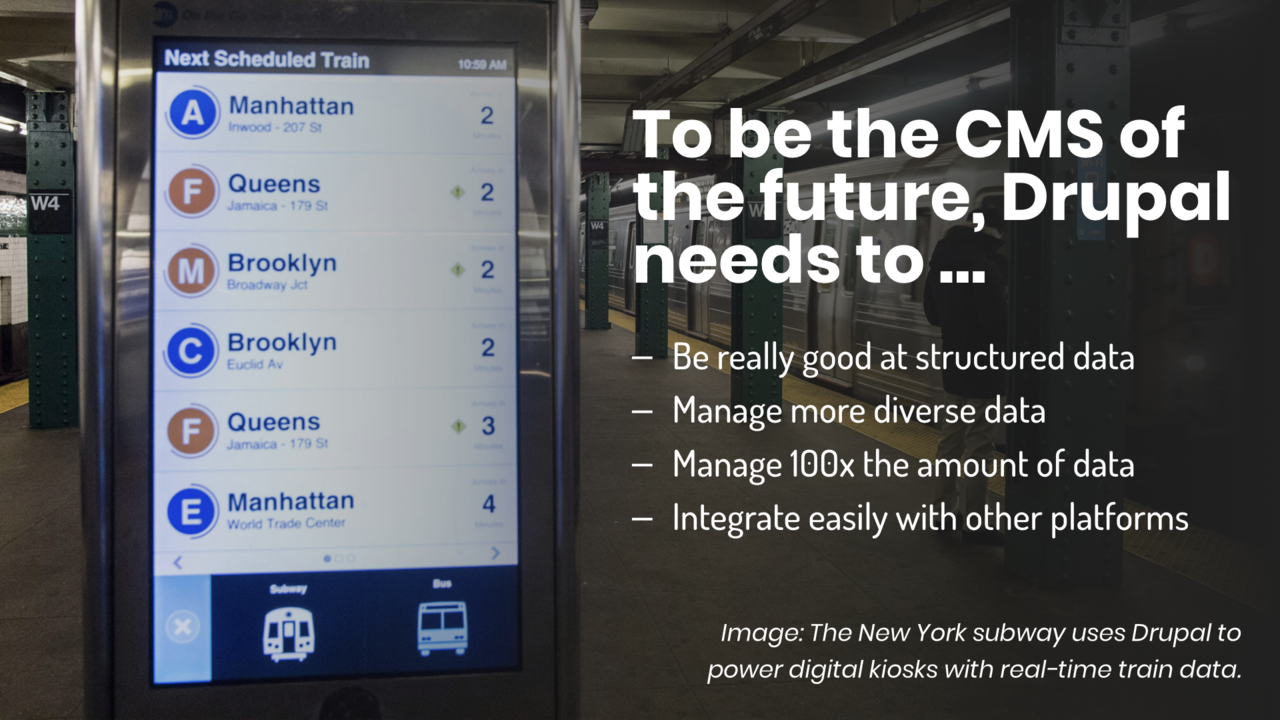 We’ve already seen the beginnings of a content explosion, and will experience 300 billion new devices coming online by 2030. By continuing to make Drupal a better and better content repository with a flexible API, we’ll be ready for a future with more content, more integrations, more devices, and more channels. 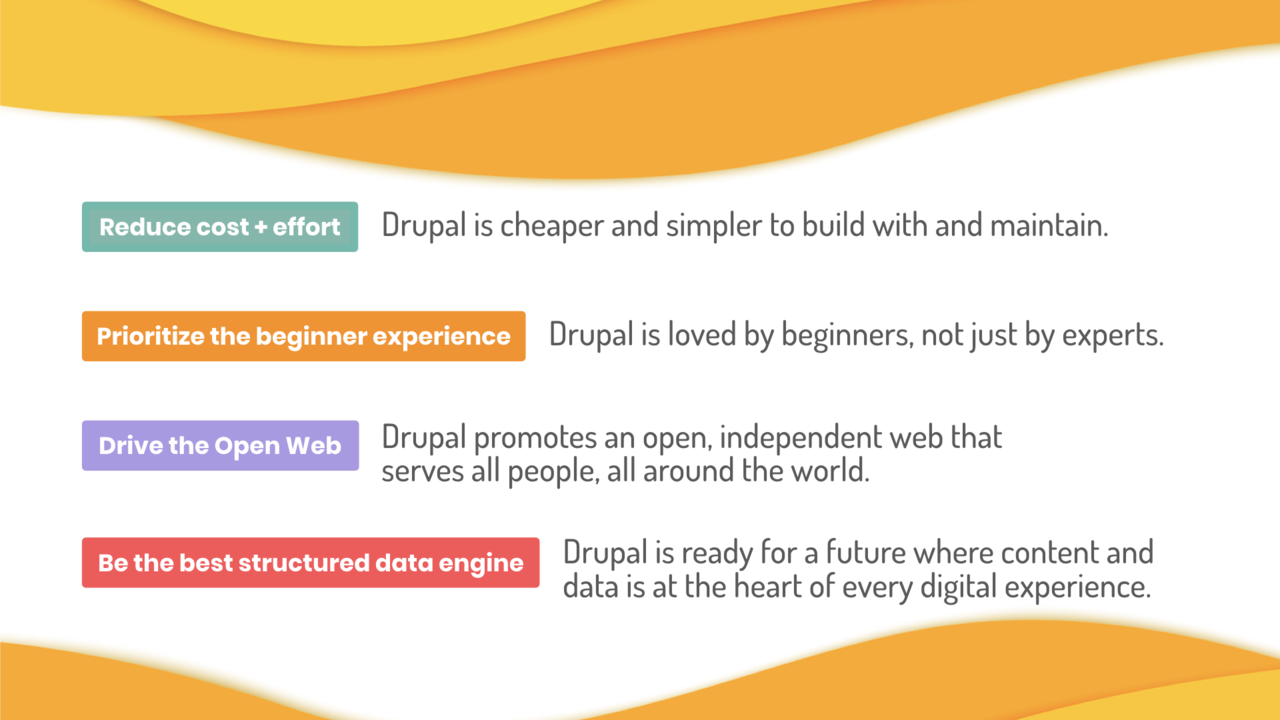 Over the next six months, we’ll be opening up these proposed tracks to the community for discussion, and introducing surveys to define the 10 inaugural initiatives for Drupal 9. So far the feedback at DrupalCon Amsterdam has been very positive, but I’m looking forward to much more feedback!

In a previous blog post, Balancing Makers and Takers to scale and sustain Open Source, I covered a number of topics related to organizational contribution. Around 1:19:44, my keynote goes into more details, including interviews with several prominent business owners and corporate contributors in the Drupal community.

You can find the different interview snippet belows:

Thank you to everyone who attended Drupalcon Amsterdam and contributed to the event’s success. I’m always amazed by the vibrant community that makes Drupal so unique. I’m proud to showcase the impressive work of contributors in my presentations, and congratulate all of the hardworking people that are crucial to building Drupal 8 and 9 behind the scenes. I’m excited to continue to celebrate our work and friendships at future events.

Thanks to the 641 individuals who worked on Drupal 8.8 so far.

Thanks to the 243 different individuals who contributed to Drupal 8.8 to date.