Do you want to reach more markets and people? Do you want to tailor your content for clients from a range of locations around the world, without having to manage every single translation? Then the Language Hierarchy project could be for you! I wrote a while ago about how this module gives editors more power and flexibility without the extra effort that can come with each translation added to a site. Now Drupal 8 sites can use the project with confidence, as I produced its first stable release candidate for Drupal 8 last month!

Thank you to all those that contributed towards pushing Language Hierarchy towards this release. Especially to Julabo GmbH and ComputerMinds, for sponsoring my recent work, as well as SPX for giving us the opportunity to develop most of the features for a real-world use case in the first place. Also Gábor Hojtsy for his ‘Sublanguage’ sandbox, which was the foundation of the Drupal 8 version of the module. 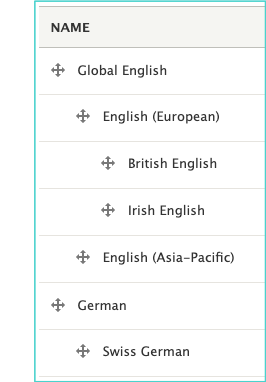 Drupal is already a fantastic solution for managing multilingual content. Adding Language Hierarchy means you can configure languages to ‘fall back’ through a hierarchy when a translation is missing. This means that you can set up all sorts of specific languages to ensure that your content is tailored to the different countries that you are reaching with less work. It can also stop unrelated translations showing when the correct translation is not in place yet.

Sound good? Here are some more clever things that the Drupal 8 version of Language Hierarchy provides… listed with some of my favourite flags of countries, just for fun 🙂

Development on Language Hierarchy will continue of course, not least ahead of the release of Drupal 9. All contributions, such as feedback, testing, sponsorship or patches are very welcome. There is always room for improvement! The project’s issue queue is a good place to start if you can help. If you need assistance with your multilingual web project, leave a comment below, or get in touch with us at ComputerMinds.

Photo by Vladislav Klapin on Unsplash.