Mobomo: Drupal vs WordPress: Which is Better for Your Business? 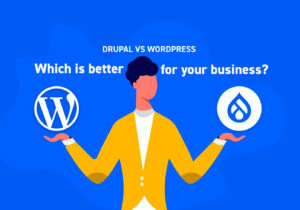 Like many developers, some of our first websites were built on the backbones of WordPress. It’s the hyper-popular king of content management systems. It has name recognition, an overflowing user base, and plenty of third-party integrations that help cut your development time. But, over the years, we’ve migrated almost exclusively to Drupal. So why did we switch? What is it about Drupal that leaves developers drooling? And why would anyone pick Drupal — which has around 1.3 million users — over WordPress —which has over 400 million users? Today, we’re going to compare David to Goliath. Why is Drupal, the third most active CMS behind WordPress and Joomla, a good choice for businesses looking to build a refreshing, impactful, and feature-rich website?

UNDERSTANDING THE CORE DIFFERENCES BETWEEN DRUPAL AND WORDPRESS

By far, the most significant difference between WordPress and Drupal is the overall development need. WordPress is simple. There are hundreds of thousands of third-party plugins that you can leverage to build an entire website with virtually no coding or developing knowledge. And, that’s the single biggest reason that WordPress is so massive. Anyone can build a WordPress site. It’s easy. Drupal requires development. If you want to build a Drupal website, you’re going to have to hire some developers. So, naturally, Drupal has fewer overall users. But, it’s essential to make that distinction. Drupal is built for businesses, public entities, and enterprises. WordPress is built for your everyday website. It’s important to keep this main difference in mind. It’s this difference that resonates throughout these core pillars. And, it’s this core difference that creates pros and cons for each platform.

We consider security, flexibility, and scalability to be the three primary pillars of a CMS. An amazing designer can make a fantastic template or theme regardless of the CMS. And ease-of-use is relative to your plugins/modules, familiarity with the platform, and overall development capabilities. So those are both highly subjective. Security, flexibility, and scalability aren’t subjective; they are what they are.

WordPress has a security problem. Alone, WordPress accounts for 90% of all hacked websites that use a CMS. There’s a tradeoff that comes with leveraging third-party plugins to build websites. You increase your threat landscape. WPScan Vulnerability Database shows 21,675 vulnerabilities in WordPress’s core and with third-party plugins. This security vulnerability issue has been an ongoing headache for WordPress from the start. If we do a play-by-play, year-over-year of WordPress’s history, we see an ongoing and consistent security issue:

The list goes on. Year-over-year, more vulnerabilities happen across WordPress. And this is an important point. WordPress has subpar security by design. It’s the tradeoff they made to build an ecosystem that doesn’t require development. We aren’t saying that the core of WordPress is inherently security-stripped. It’s not. But, given the scale, scope, and third-party-fanatic nature of the platform, it’s weak on security by nature. Drupal, on the other hand, is the opposite. Websites require development time, each website is customized to the user, and building a website takes time and patience. The tradeoff is better security. Drupal has built-in enterprise-scale security, and you don’t rely on a hotchpotch of third-party applications to build your website’s functionality. There’s a reason that NASA, the White House, and other government entities use (or used) Drupal. It has better security. We want to take a second to make the distinction. WordPress has a secure core. We would argue that Drupal has a more secure core. But the difference isn’t massive. WordPress’s security vulnerabilities are a product of its reliance on third-party applications to make a functional website.

WordPress is more flexible than Drupal to some users. And Drupal is more flexible than WordPress to some users. That may sound complicated. But it comes down to your development capabilities. Drupal has more features than WordPress. Its core is filled with rich taxonomies, content blocks, and unique blocks than WordPress. But, if you aren’t experienced, you probably won’t find and/or use many of these functionalities. On the surface, WordPress has more accessible features. At the core, Drupal is the single most feature-rich CMS on the planet. So, for businesses (especially public entities and larger enterprises), Drupal has a more robust architecture to tackle large-scale projects that have hyper-specific needs. For small businesses and personal website owners, WordPress is easier to use and requires far less development experience to tap into its functionalities, features, and flexibility.

Drupal has better scalability. This one isn’t a competition. Again, this comes down to the dev-heavy nature of the platform. To scale WordPress websites, you add more plugins. To scale Drupal websites, you develop more. There’s a key practical difference here. Drupal modules, taxonomies, and content blocks all exist in the same ecosystem. Each WordPress plugin is its own micro-ecosystem. So, with WordPress, most users are stringing together a ton of third-party ecosystems in an attempt to create one overarching website. Also, Drupal is built for enterprise-scale projects. So there’s backend support and a large landscape of community support around large-scale projects. WordPress is a catch-all CMS that has a little of everything. If WordPress is a Swiss army knife, Drupal is a custom, hand-forged bread knife — explicitly designed to help you scale, slice, and butter larger projects.

ARE YOU READY TO DEVELOP YOUR PERFECT DRUPAL WEBSITE?

At Mobomo, we specialize in Drupal development projects. Our agile-based team of top-level design, development, and support talent can help you launch and scale your website to fit your unique needs. From NASA to Great Minds, we help private and public entities build dreams and execute visions.

The post Drupal vs WordPress: Which is Better for Your Business? appeared first on .