The first feature release of Drupal 9 includes the new experimental Olivero frontend theme and various additions to the Claro administration theme. Installer performance is improved 20% and full Composer 2 and PHP 8 support is available. Images with known dimensions are set to lazy-load by default to improve frontend performance.

A new beta experimental frontend theme has been added to Drupal core called Olivero. This is a new modern and clear theme that is planned to become the new default Drupal theme later (replacing Bartik). Subtheming Olivero is currently not supported, but formal support may be included in the future. 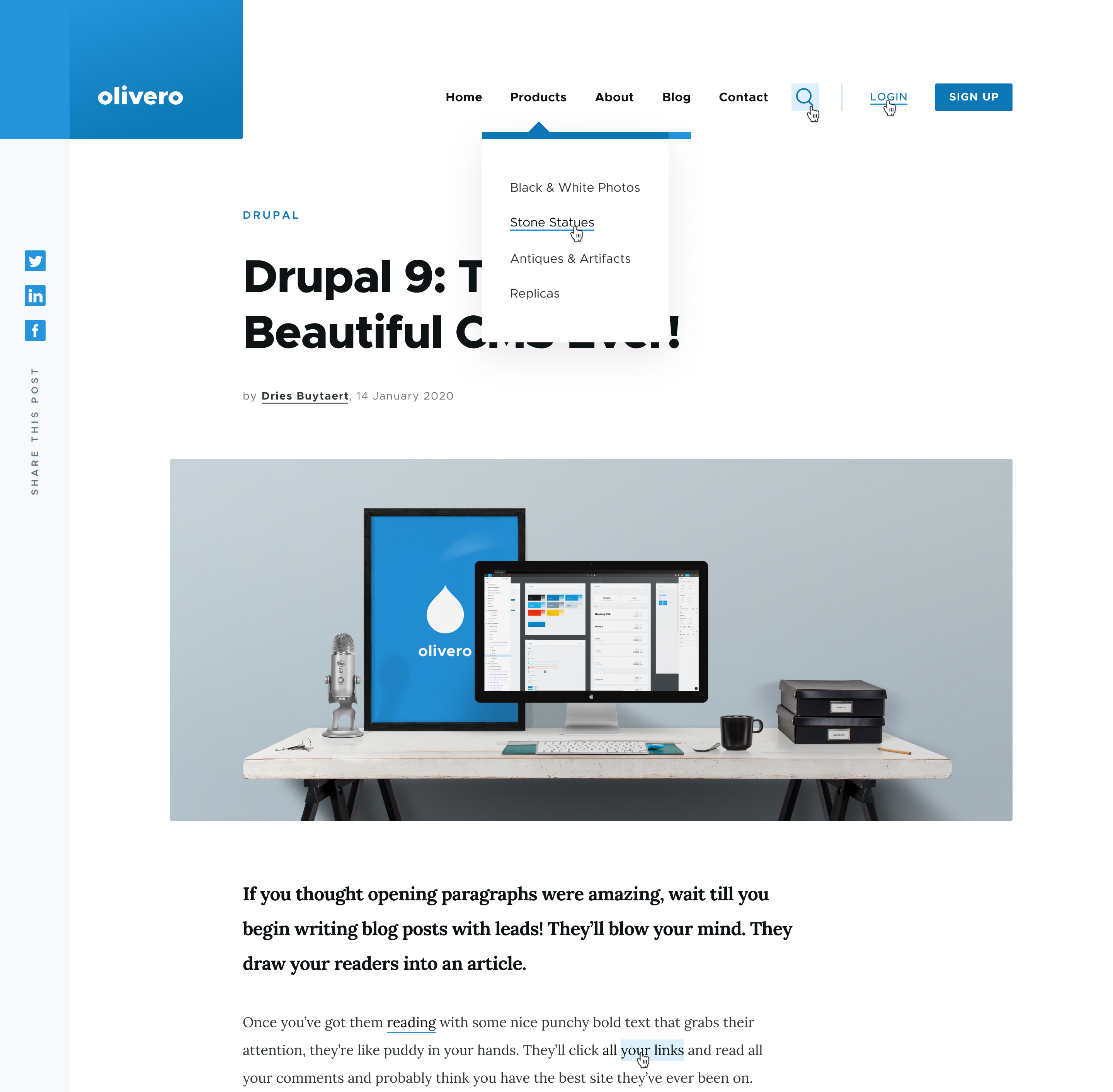 The theme is named after Rachel Olivero (1982-2019). She was the head of the organizational technology group at the National Federation of the Blind, a well-known accessibility expert, a Drupal community contributor, and a friend to many.

Key additions to the Claro theme

Drupal 9.1 is fully compatible with Composer 2. If you are using Composer 1, now would be a great time to update. Most plugins used on Drupal sites are compatible and/or obsolete with the new version. The memory and performance requirements reduced dramatically, which should improve your experience.

PHP 8 is also supported in Drupal 9.1, including all of Drupal’s dependencies. There may be contributed projects that are not fully compatible though. Drupal 9 is still compatible with PHP 7.3 and older. There are various exciting new features in PHP 8, but the JIT compiler and performance improvements are not likely to affect Drupal. Drupal 10 is planned to require PHP 8 in 2022. It is worth examining the support timelines of PHP versions to schedule your platform updates.

Installer performance is improved 20%, so getting a new Drupal site set up will be faster.

Images rendered by Drupal with known dimensions will be set to lazy-load automatically. This means browsers will only load them when they should appear in the viewport of the user, improving the user experience by making content appear faster.

What does this mean for me?

Update at least to 8.9.x to continue receiving bug fixes until the end of life of Drupal 8 in November 2021. The next bug-fix release (8.9.11) is scheduled for January 6, 2021. (See the release schedule overview for more information.) As of this release, sites on Drupal 8.8 will no longer receive security coverage.

We suggest that you update from Drupal 8 to Drupal 9 though. Updating is supported directly from 8.8.x and 8.9.x. Of the top 1000 most used drupal.org projects, 85% are updated for Drupal 9, so there is a high likeliness that most of the modules and themes you rely on are compatible.

Drupal 7 support was extended to November 28, 2022, and will continue to receive bug and security fixes throughout this time. From November 2022 until at least November 2025, the Drupal 7 Vendor Extended Support program will be offered by vendors.

Minor releases like Drupal 9.1.0 include backwards-compatible API additions for developers as well as new features.

Since minor releases are backwards-compatible, modules, themes, and translations that supported Drupal 9.0.x and earlier will be compatible with 9.1.x as well. However, the new version does include some changes to strings, user interfaces, internal APIs and API deprecations. This means that some small updates may be required for your translations, modules, and themes. Read the 9.1.0 release notes for a full list of changes that may affect your modules and themes.

This release has advanced the Drupal project significantly and represents the efforts of hundreds of volunteers and contributors from various organizations. Thank you to everyone who contributed to Drupal 9.1.0!