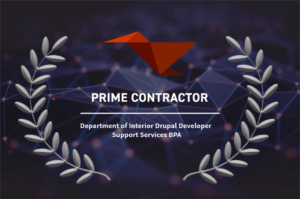 Mobomo, LLC is pleased to announce our award as a prime contractor on the $25M Department of Interior (DOI) Drupal Developer Support Services BPA . Mobomo brings an experienced and extensive Drupal Federal practice team to DOI.  Our team has launched a large number of award winning federal websites in both Drupal 7 and Drupal 8, to include www.nasa.gov, www.usgs.gov, and www.fisheries.noaa.gov.,These sites have won industry recognition and awards including the 2014, 2016, 2017 and 2018 Webby Award; two 2017 Innovate IT awards; and the 2018 MUSE Creative Award and the Acquia 2018 Public Sector Engage award.

DOI has been shifting its websites from an array of Content Management System (CMS) and non-CMS-based solutions to a set of single-architecture, cloud-hosted Drupal solutions. In doing so, DOI requires Drupal support for hundreds of websites that are viewed by hundreds of thousands of visitors each year, including its parent website, www.doi.gov, managed by the Office of the Secretary. Other properties include websites and resources provided by its bureaus  (Bureau of Indian Affairs, Bureau of Land Management, Bureau of Ocean Energy Management, Bureau of Reclamation, Bureau of Safety and Environmental Enforcement, National Park Service, Office of Surface Mining Reclamation and Enforcement, U.S. Fish and Wildlife Service, U.S. Geological Survey) and many field offices.

This BPA provides that support. The period of performance for this BPA is five years and it’s available agency-wide and to all bureaus as a vehicle for obtaining Drupal development, migration, information architecture, digital strategy, and support services. Work under this BPA will be hosted in DOI’s OpenCloud infrastructure, which was designed for supporting the Drupal platform.