Mediacurrent: Can I See the Menu Please? Building and Integrating a Menu in Drupal

By nature, menus are complicated. They’re not easy to work with, build or style, and yet they are probably the single most important navigation element of any website. Despite their complication, they need to be perfect to serve their purpose. A menu can make or break a website. They can make your browsing experience a pleasant one, or can drive you to leave a website frustrated and likely never to return.

When it comes to menus and forms, it is best to let Drupal dictate the direction rather than build them independently of Drupal. By adhering to Drupal’s best practices we can save a lot of time, effort and frustration. For example, rather than writing your menu’s markup before you see it being printed by Drupal, it is best to build your menu in Drupal and see what the markup looks like. Then you can use Drupal’s markup as a starting point for writing your menu’s markup.

This is going to be a lengthy post (mostly because it includes a lot of code snippets), but this article will cover all you need to accomplish the following:

For more in-depth explanation on building and integrating components read our blog series.
Note: This series is over two years old and many things have changed since then, but the basics of building a component still apply.

If the code above does not look familiar to you it’s probably because you’ve never used a Twig Macro. I will explain the macro in detail shortly, but for now let’s move on to completing the component.

These styles are as bare as possible. They are simply to make the menu look presentable and could use a lot of improvements. This is what the multi-level menu looks like: 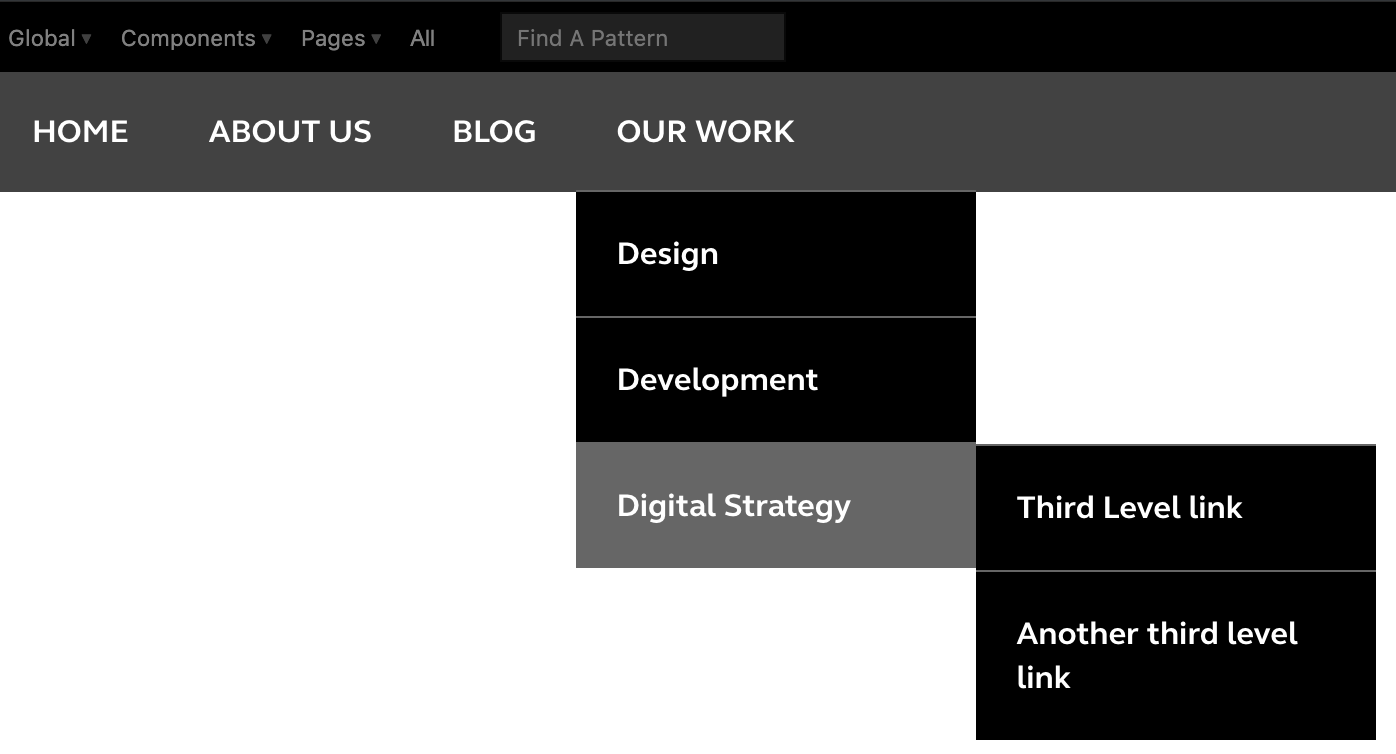 It’s important to note that the component will simply be used for styleguide purposes. We will create a similar component for Drupal, but we will use the original component above as a base for markup styles and behavior.

Why do we need to create a duplicate component for Drupal?

Drupal provides attributes Pattern Lab does not understand. Rather than over complicating the component, we are going to keep it simple for styleguide purposes while the Drupal version is more elaborate with all the things Drupal needs. This is not required but provides more clarity to the process.

Create a Twig template suggestion for the main menu

Our ultimate goal is to update Drupal’s menu system to render with similar markup as the main-menu component. This will require several steps which we will cover next.

Follow these steps to enable Twig Debugging in your theme. Then, you can inspect your site, which will allow you to see the various template suggestions that Drupal uses to render the page; including your navigation menu. The debug information looks like this:

Under Begin Output notice the path where menu.html.twig can be found, the example above is pointing to Drupal’s stable theme.

To ensure we only affect the main menu and not other menus on our site, we are going to make a copy of Drupal’s menu.html.twig in our theme and then override it. This is recommended rather than modifying Drupal core’s template. Let’s start:

Create a multi-level menu in Drupal

Before we look at the code inside menu.html.twig as it may look confusing or not familiar, we are going to move it into the same directory as the main-menu component. We are doing this to make some improvements to the macro.

The above code is a Twig Macro. Macros are the Twig version of functions. Just like you would write a function in PHP to do something and return something, you can use a Twig macro to generate some output.

If we were to use the macro provided by Drupal as is our menu would render at its simplest form with minimum markup and almost no semantic css classes. See example:

The markup above may look different depending on your base menu. The classy base menu may show more markup but it does not make our job easier to style the menu.

Not having the right markup for the menu, or any other element for that matter, can really complicate things for us when it’s time to style. We are going to modify the macro so it matches the markup of the main-menu component, and as a result the styles we wrote for the component will apply to the Drupal menu.

Let’s step through this macro line by line to understand what it does. To keep things simple we are going to ignore all the custom classes we added above and focus on the macro itself.

Looping through the menu tree

Looping through the items array allows us to intersect each item and apply classes or attributes.

some classes which can be helpful if we need to style the different states of the menu.

RESOURCE: I recently ran into a blog post by Tamas Hajas where he has a great way to address classes and states on a menu. Check it out Drupal 8 Twig: add custom CSS classes to menus.

Looking at the rendered menu after Macro improvements

Now that we have a better understanding on how the macro works, and after making the improvements discussed above, the markup for the menu would look something like this:

The last part of the process is to integrate all the work we’ve done with Drupal, so our Main Menu is rendered with the markup, styles and behavior we implemented when we built the component.

Since we moved the macro to the component’s location, all we need to do in the main-menu.html.twig template is to import the macro and provide the parameters the macro expects. These parameters can be found in the twig template’s comments.

If we did our job right, Drupal’s menu should now look and behave the same way as our component. In addition, if you inspect the Drupal page, the menu should reflect the same markup as the main-menu component.

IMPORTANT: If you are using the Main Navigation blog to position the navigation where you want it in the page, you may need to make a copy of the twig template for that block in order to assign the main-menu class the menu needs.

As a best practice, we should create a drupal library to attach any styles and javascript to our component. See this article for adding CSS and JS to a page or component.

In our case our library would look like this:

This library has already been attached above inside menu–main.html.twig

By doing this any styles we wrote for the component will apply to the main navigation when it’s rendered in Drupal. Drupal libraries have no effect in Pattern Lab.

After completing the steps above, clear your Drupal’s cache and reload your Drupal site. You should see your Drupal menu being rendered with all the styles and markup we wrote throughout this post.

I’d like to admit that I went about the long way to get the main menu working on both, Pattern Lab and Drupal. There are other ways to accomplish this by using contrib modules such as Simplify Menu (full disclosure, I helped create the module), and perhaps Twig Tweak among several others, however, the approach I took here gives you the most control and that can make all the difference if you are dealing with a pretty advanced or complicated menu.