Read our Roadmap to understand how this work falls into priorities set by the Drupal Association with direction and collaboration from the Board and community.

Get Ready for Drupal 9

Are you wondering what it will take to upgrade to Drupal 9? Good news – it’s going to be easier than any other major version upgrade in Drupal’s history.

The upgrade to Drupal 9 is just like any other Drupal upgrade, except that the new codebase has updated key dependencies Drupal relies on and removed deprecated code. As long as all the modules and custom code you use don’t rely on deprecated code – you should be good to go.

As it turns out, many contributed or even custom modules only need a one-line change to be ready for Drupal 9. You can use these community created tools to check the status of your modules: the upgrade status module, or the Drupal Check command line tool. In many cases, you may just need to remove some deprecated code in favor of the more modern implementations. Drupal Rector can provide you with automated fixes for many of these deprecations.

Still getting to grips with Composer?

If you’re still getting to grips with using Composer after the changes in Drupal’s 8.8.0 release, don’t worry – there’s help to be found. The community has extensively documented the different scenarios a site owner may find themselves in with this update.

If you’ve previously used one of the community created templates to manage your site to composer, there are instructions to migrating to the officially supported method.

If you’ve never used Composer at all – you’re in luck – with 8.8.0 and beyond everything you need is already in place.

As mentioned in our December update, we’ve been making major improvements to the Drupal.org packaging pipeline, to support packaging Drupal using Composer create project. We reached a major milestone at DrupalCamp New Jersey, allowing our packaging pipeline to properly support the Composer create project command when generating tar and zip files, and paving the way for enhancements to the core subtree splits.

Updating this pipeline is critical for ongoing releases of Drupal, and is part of paving the way for the Drupal 9 alpha release. We want to thank Acquia for donating time to help us get this work ready.

Per our roadmap for supporting Semver for contributed projects on Drupal.org, we have updated the way contrib version numbers are stored, making existing version numbers parseable when we convert to full semver. We also collaborated with core contributors at DrupalCamp New Jersey to identify and resolve a number of other related issues.

Drupal.org now has an example project which uses semantic versioning, which we are using as the testbed for this support, and to prove out any additional UI changes that we want to make before rolling this out to all other contributed projects.

Want to learn more about Semantic Versioning and how to use it properly within your projects? Semver.org can walk you through it.

It’s almost time for the DrupalCon Minneapolis program to be published! To prepare for this launch, we’ve made updates to the program schedule to improve accessibility and readability for attendees.

In particular these updates have focused on line weights, spacing, and other formatting changes that should improve readability. With the accepted sessions being announced soon,  we’re excited to see what you think! 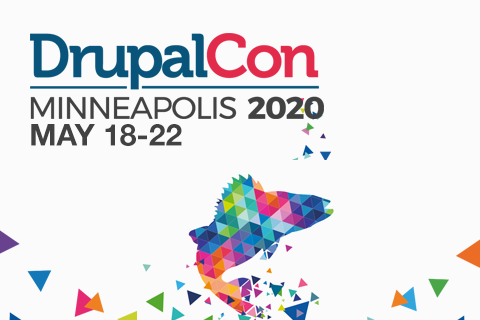 Some of the best parts of DrupalCon are the social events that take place around it. They’re a chance for the community to celebrate and build camaraderie, and an established tradition. We’ve made updates to the social event submission process to make getting your event listed easier than ever.

Join the Drupal Community in person!

By the way… have you registered for DrupalCon yet?

DrupalCon is the best place to come together with other members of the Drupal community in person. It’s also the central meeting point for all of facets of the Drupal business ecosystem, so if you are end-user looking for training or a vendor to support your Drupal deployment – there’s no better place to be than DrupalCon.

DrupalCon Minneapolis is going to be here any day now – so get your tickets before prices go up!

Can’t make it to Minneapolis? Join us at DrupalCon Barcelona 2020 in September.

If you would like to support our work as an individual or an organization, consider becoming a member of the Drupal Association.
Follow us on Twitter for regular updates: @drupal_org, @drupal_infra