Read our roadmap to understand how this work falls into priorities set by the Drupal Association with direction and collaboration from the Board and community. You can also review the Drupal project roadmap.

Drupal 9 beta is closer than ever!

At the time of writing this post, there are fewer than three beta-blockers for Drupal 9. This hopefully means that we’ll be seeing a beta release of Drupal 9 very soon.

What does this mean for you?

Now’s the time to get familiar with what’s coming in Drupal 9, and to check your contributed or custom modules to see if you’re ready to go. The community has put together a number of tools that you can use: the upgrade status module, the Drupal Check command line tool, and Drupal Rector.

We also need your help! We’re looking for more individuals and organizations to participate in the Drupal Beta Test program. It’s a great way to contribute to Drupal.

We’re really proud of the work we accomplished in the first phase of the automatic updates initiative; in Drupal 7 and Drupal 8, sites that don’t depend on Composer workflows now have complete support for securely and automatically updating Drupal Core. In the second phase of this work we want to extend that support to contributed projects, and to support Composer-based site installations.

We need your help to make the second phase happen. Will you contribute?

Learn more on our call for sponsors & contributors post.

In preparation for releasing the full DrupalCon Minneapolis speaker schedule, we’ve made some updates to the accepted sessions page.

The newly redesigned page now highlights our excellent keynote speakers (to include Mitchell Baker from Mozilla!) as well as other featured speakers for this year’s event. On top of that you can filter the list of sessions by track, to get a jumpstart on finding your favorite sessions, before the full schedule is released.

We’ve rearchitected the version management for contributed projects, so that they can begin using Semantic Versioning as we enter the Drupal 9 era. You can see an example of this in practice on this sample project: semver_example.

We’re coordinating with the Drupal core maintainers to select a window for enabling the new semver functionality across all projects. We want to ensure that Drupal end-users will still be able to find and easily understand which projects they can use once projects are able to be compatible with both D8 and D9, and are using semver version numbering.

Not familiar with semantic versioning?

The three digit numbering scheme (MAJOR.MINOR.PATCH) is designed to provide guide rails around API breaking changes. In Drupal core for example, patch releases are incremented whenever there are bug fixes or security releases. Minor releases indicate that new features have been introduced. And the Major version only changes when deprecated APIs are removed and fundamental architectural changes have been introduced.  Contributed project maintainers are encouraged to adopt the same pattern.

Speaking of releases – we’ve recently updated the display of releases to provide a cleaner view of release metadata. This should make it much easier to understand the history of recent releases, and to see at a glance which ones were bug fixes vs. feature releases vs. security releases.

You can see a detailed example by looking at the release history for Drupal core.

Because of the six-month minor release cycle, it’s become much more important to have more granular insight into what minor versions of Drupal are in use in the wild. 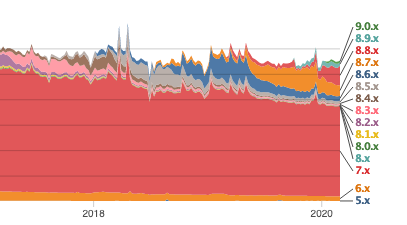 As you can see above, we’ve updated the usage stats for Drupal to display usage by branch. This is mostly useful for Drupal Core, but may be valuable for contrib maintainers as well as they look to understand which versions of their projects are in highest demand.

This is a powerful improvement in ensuring that key modules are ready to use with Drupal 9 on day one, but it also has the potential to be confusing for Drupal site owners and evaluators who are trying to discover what projects they can use. We’re looking to update the project browsing on Drupal.org to make sure discoverability doesn’t suffer with this change. If you have good ideas about this user experience, please feel free to share them on the issue!

Beginning with Drupal 8.8.0, Drupal needed to be packaged from the output of Composer create project, rather than as the simple contents of a git clone. These changes to packaging have additional ramifications for how we manage tagged releases for Drupal core, and in particular for how we manage security releases. We’ve been making a variety of updates to the Packaging pipeline since Drupal 8.8 to make the process more transparent, resilient, and performant, and that work continues.

Because minimum requirements are changing with Drupal 9, we’ve added new test environments for both Postgres 10 and Postgres 12.

SQLite has also been updated within the DrupalCI test environment to version 3.26, to support testing on the correctly supported version.

MariaDB forked from MySQL after the acquisition by Oracle, but at first had remained fairly consistent. However, with recent versions MariaDB has had to diverge, and so we are now providing explicit testing support for MariaDB, with test environments for versions 10.2.7 and 10.3.22.

If you would like to support our work as an individual or an organization, consider becoming a member of the Drupal Association.