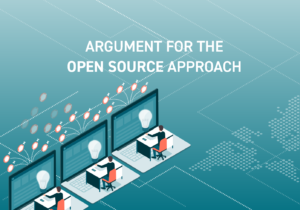 If you engaged in a word association game, one of the first things people would respond when you say “open source” is that it’s free. If any of those people are in the position of purchasing software licenses for a business or organization, that makes open source (a.k.a., free) definitely a benefit worth exploring. Open source has the potential to save thousands of dollars or more, depending on the software and the size of the organization.

Even though eliminating a budget line item for licensing costs may be enough to convince some organizations that open source is the way to go, it’s actually only one of several compelling reasons to migrate from proprietary platforms to open-source architecture.

In a debate on open-source vs. licensed platforms, the affirmative argument will include these four, additional points:

When businesses provide workstations for their employees, they choose (often inadvertently) the framework on which their organizations operate. For example, if a business buys Dell computers, it will operate within the Microsoft Windows framework. This isn’t necessarily a bad thing. A business with limited IT and development resources won’t have to worry about how to keep its operating system working or whether business applications or security solutions are available. Microsoft has a line of solutions and partnerships that can provide what they’re looking for.

With a system built on an open-source platform, on the other hand, it may take more resources and work to keep it running and secure, but it gives developers the freedom to do exactly what the end user needs. You aren’t limited by what a commercial platform enables you to do.

In some markets, foregoing the status quo for developmental freedom sounds like risk. It’s a major reason that government users lag behind the commercial space in technology. They’re committed to the old systems that they know are robust, secure, and predictable at budget time — even though they’re outdated. When those organizations take a closer look, however, they quickly realize they can negate development costs through greater visibility, efficiency, and productivity that a platform that specifically supports their operations can provide.

Open-source platforms are also hardware agnostic, giving organizations more latitude when it comes to the computers, mobile devices, and tools they can use, rather than being locked into limited, sometimes expensive, options for hardware.

Moreover, development freedom delivers more ROI than merely decreasing current costs. Open-source platforms give developers the freedom to customize systems and innovate. If your system enabled you to expand your reach, better control labor costs, and support new revenue streams, what impact could that have on your business?

Enterprises and manufacturers have traditionally guarded their proprietary systems, which gave them an edge in their markets and control over complementary solutions and peripherals end users needed. Those same proprietary systems, however, could now be a business liability. Many markets are moving toward open source to provide greater interoperability, and businesses continuing to use proprietary platforms will increasingly be viewed as less desirable partners.

Military avionics is a prime example. This industry is migrating to the Future Airborne Capability Environment (FACE) Technical Standard. Administered by the FACE Consortium, this open standard aims to give the U.S. Department of Defense the ability to acquire systems more easily and affordably and to integrate them more quickly and efficiently.

You’ll also find a preference for open-source architecture in some segments of the tech industry as well, such as robotics. The Robot Operation System (ROS) is a set of open resources of tools, libraries, and conventions that standardizes how robots communicate and share information. ROS simplifies the time-consuming work of creating robotic behaviors, and ROS 2 takes that objective further by giving industrial robot developers support for multirobot systems, safety, and security.

Open source projects can also move more quickly than developing on a proprietary platform. You may be at the mercy of the vendor during the development process if you require assistance, and certifying hardware or applications occur on their timelines.

That process moves much more quickly in an open source community. Additionally, members of the community share. Some of the best developers in the industry work on these platforms and often make their work available to other developers so they don’t need to start from scratch to include a feature or function their end user requires. A modular system can include components that these developers have created, tested, and proven — and that have fewer bugs than a newly developed prototype.

Developers, using prebuilt components and leveraging an open source community’s expertise, can help you deploy your next system more quickly than starting from ground zero.

Open-source architecture also gives a business or organization advantages beyond the IT department. With open source, you have more options. The manager of a chain of resorts facing budget cuts, for example, could more easily find ways to decrease operating expenses if her organization’s system runs on an open-source platform. A chain that operates on a commercial platform, however, may have to find other options, such as reducing staff with lay-offs.

Open source architecture also decreases vendor lock-in. In a world that’s changing at a faster and faster pace, basing your systems open-source architecture gives you options if a vendor’s company is acquired and product quality, customer service, and prices change. It also gives you flexibility if industry standards or regulations require that you add new features or capabilities that your vendor doesn’t provide, decreasing the chances you’ll need to rip and replace your IT system.

The Price of Open Source

To be perfectly honest in the open source vs. commercial platform debate, we have to admit there is a cost associated with using these platforms. They can’t exist without their communities’ contributions of time, talent, and support.

At Mobomo, for example, we’re an active part of the Drupal open-source content management system (CMS) platform. Our developers are among the more than 1 million members of this community that have contributed more than 30,000 modules. We also take the opportunity to speak at Drupal community events and give back to the community in other ways.

Regardless of how much we contribute to the community, however, it’s never exceeded the payback. It’s enabled lower total cost of ownership (TCO) for us and our clients, saving millions of dollars in operating expenses. It has ramped up our ability to create and innovate. It’s also allowed us to help build more viable organizations and valuable partnerships.

The majority of our industry agrees with us. The State of Enterprise Open Source report in 2019 from Red Hat asked nearly 1,000 IT leaders around the world how strategically important open source is to an enterprises’ infrastructure software plans. Among respondents, 69 percent reported that it is extremely important, citing top benefits as lower TCO, access to innovation, security, higher-quality software, support, and the freedom to customize.

Only 1 percent of survey respondents said it wasn’t important at all.

Which side of the open-source vs. commercial platforms argument do you come down on?

Contact us to drop us a line and tell us about your project.

The post Argument for the Open Source Approach appeared first on .